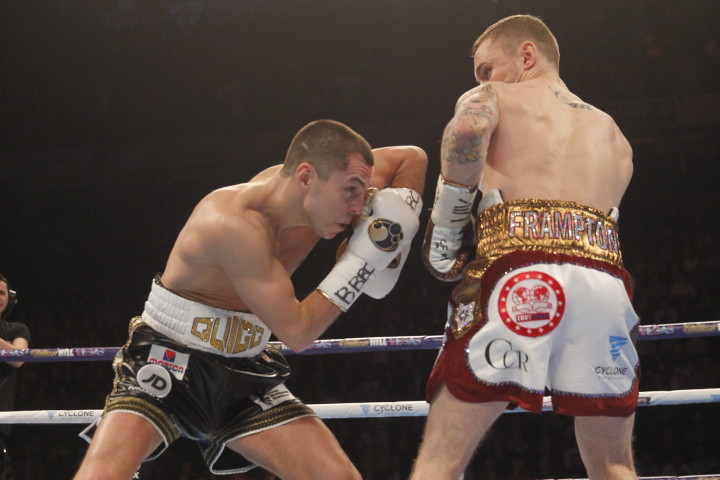 Quigg lost the fight by a 12 round split decision by the scores of 115-113 for Quigg, 116-112 and 116-112 for Frampton. Quigg believes he suffered the broken jaw in the 4th round, and he feels that it was a game changer for him from that point on. However, Quigg wasn’t doing anything at all before the broken jaw, so I fail to see how it could have changed the outcome in the fight.

If anything, Quigg fought better AFTER the broken jaw rather than before it. Who knows? Maybe the broken jaw woke Quigg up, made him realize that he was in an actual fight, and needed to fight back. It was a very boring fight, I must admit. If not for Frampton doing all the work, you would have seen a massive stampede for the exits from bored fans.

The judge that scored the fight for Quigg 115-113 must have been watching another fight because no way on earth did Quigg deserve to win that fight. You hate to see an oddball score like that, because it really isolates the judge when he is the only one that feels that Quigg won. It was just a very, very bizarre score.

“He caught me with an uppercut and has broken my jaw so that put a bit of a spanner in the works,” Quigg said to skysports.com about him suffering a broken jaw. “I had to have round five off then just to see what the damage was like, if it was going to be painful when I got hit. Luckily it wasn’t, it was just numb. It felt like I had been to the dentist’s and had an injection.”

So there it is. Quigg is admitting that he stopped trying to fight hard for a round to judge how badly hurt he was. Now if he kept fighting hard and not taken a round off to estimate how hurt he was, he might have won the fight. Boxing is war, and you don’t back off if you get a little injury. You go down on your shield.

I wonder why Quigg’s promoter Eddie Hearn included X-ray’s of his broken jaw on Twitter. Did he feel he needed to show boxing fans proof of his injury so that they would see it as an excuse for his loss to Frampton? I’m just saying.

It’s too bad that Quigg didn’t keep fighting hard because if he had been able to edge Frampton in some of the early rounds, then he would have pulled it out because he was the better fighter in the second half of the contest. Frampton clearly gassed out and was only able to fight well in a couple of the last six rounds. This just goes to show you that you’ve got to fight hard for the full 12 rounds no matter what kind in injuries you suffer.

You do not like to see Quigg squawking about his aches and pains. He needed to tough it out and man up in order to win the fight.

“I just want the rematch if I can have the chance, because I really do think if I start quicker next time it will be a different story,” said Quigg. “We have both been in there in a great fight and I’m just hoping we can do it again because I know I have got the beating of him.” 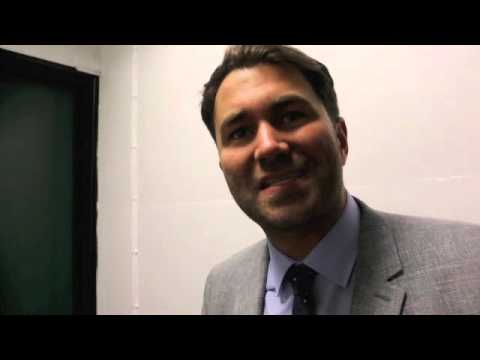 Please, no rematches. Frampton needs to move on to bigger and better things, and Quigg needs to back to the drawing board and learn how to start fast in his fights instead of giving away the first six rounds. Quigg also needs to learn to tough it out when he suffers injuries. If he wants to take it easy each time he suffers a hangnail or something, then he’s in the wrong sport. This is not a sport for the weak. You’ve got to tough it out.

I hate to say it though, but I can definitely see Frampton giving Quigg a rematch. I don’t think Frampton is in a hurry to fight the No.1 fighter in the 122lb division in Guillermo Rigondeaux. Frampton’s manager Barry McGuigan wasn’t saying anything about wanting to match him with Rigondeaux next when speaking after the fight.

This has to hurt Hearn having Quigg get beaten like this. Hearn was so cocky before the fight in thinking that Quigg would beat Frampton. Now with Quigg having been beaten and dealing with a broken jaw, it’s got to be a tough pill for Hearn to swallow. A broken jaw is one of the worst injuries that a fighter can suffer, because it keeps them out of the ring for a considerable amount of time.

Heck, even when they do comeback from a broken jaw, they sometimes don’t look so good for a while. I still remember how long it took Ricky Burns and Victor Ortiz to come back from their broken jaws. It took ages for them to come back, and neither of them looked good afterwards in my view.