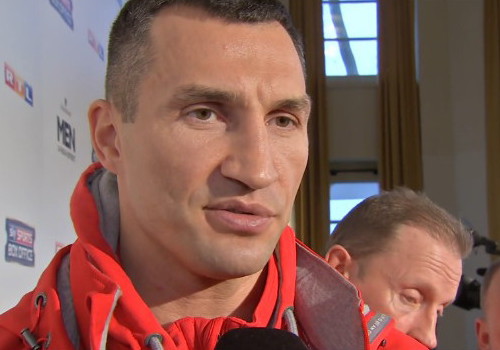 By Scott Gilfoid: In what could be a real bad omen, Wladimir Klitschko sent Anthony Joshua (15-0, 15 KOs) a Tweet today telling him to go out and kick backside in his title shot against IBF heavyweight champion Charles Martin (23-0-1, 21 KOs) on April 9 at the O2 Arena in London, UK. Wladimir was just beaten by Tyson Fury in his last fight in November of last year. It was easily the worst performance of Wladimir’s career.

If I’m Joshua, I’m not sure how I would take getting a thumb’s up Tweet from Wladimir. I mean, I’m kind of superstitious and something like that would have my spider senses going off the radar screen. I mean, the last thing that Joshua needs is to have Wladimir slapping him on the back and telling him to get Martin.

Martin is a very talented fighter and I don’t think he’s going to lose because he’s got the style and the size to defeat Joshua. It’s just a bad style match-up for Joshua, and I think his promoter Eddie Hearn royally blew it in deciding to let his golden goose take this dangerous fight.

@anthonyfjoshua Bro, believe it or not, but I'm excited for you! Good luck and kick ass on April 9th!

Joshua is one of Wladimir’s old sparring partners who briefly helped him get ready for his fight against Kubrat Pulev last year. Wladimir only sparred Joshua a little before suffering an injury. It’s unclear how Wladimir suffered the injury. I wouldn’t be surprised if he got hurt sparring with Joshua if he got bumped by him due to Joshua weighing so much.

I think Joshua is going to have problems against the 6’5” Martin no matter how much encouragement guys like Wladimir is giving him. Martin is EXCELLENT at fighting in close with short, accurate punches to the head. He’s also a southpaw. Despite the 6’6” Joshua being a little taller than the 6’5” Martin, he’s not someone that is particularly good at fighting at a distance.

I think it’s a flexibility issue or lack thereof for Joshua. He’s got all that body building muscle on his frame, and I think that makes it all but impossible for him to fight on the outside. The only thing that Joshua can do on the outside is jab, and he doesn’t have a great jab. Joshua’s main tendency is to get to medium distance and start throwing flurries. That style works obviously when Joshua is fighting guys like 47-year-old Matt Skelton, 38-year-old Kevin Johnson and an injured Dillian Whyte, but I don’t think it’s going to work at all for him against a healthy and young Charles Martin.

Once Joshua starts throwing a flurry of shots, Martin is going to catch him with shots in between and start hurting him. I hate to say it but I don’t trust Joshua’s chin after the way he was hurt by Whyte last December. Joshua was staggering around the ring like the town drunk on a Friday night and he looked bad. Like I said before, if it hadn’t been for Whyte blowing out his left shoulder in the 2nd round of that fight, I think Joshua would have went bottom’s up and been taken out.

“He [Joshua] wants to give the fans something to get excited about and he wants to become a great and even though the decision among the team took a week or so, I believe his mind was already made up from the moment I asked him,” said Joshua’s promoter Eddie Hearn . It’s a complete honor to promote an event of this magnitude. I believe it’s one that will go down in the history of the sport.”

Oh brother, I think Hearn is getting a little carried away with himself in crowing about his success in putting the Martin-Joshua fight together. Yeah, it’s a decent contest, but it’s hardly one that will go down in the history of the sport, especially if Martin strokes Joshua out of there in front of his shocked fans. It’s a decent quality fight, no more, no less. Now if this were Deontay Wilder fighting Joshua, then I could see Hearn being right about jabbering about the fight making history.

I hope Hearn keeps it together when/if Joshua gets knocked out by Martin on April 9. I don’t want to see Hearn going to pieces mentally and crying his eyes out with crocodile tears. I mean, Joshua can come back from a loss to Martin and rebuild. It won’t be the end of the world for him, even though it seem like it for Hearn.

« Chavez Jr: Canelo is going to catch Khan with an overhand shot