Charles Martin: I’m coming to the UK to make a statement! 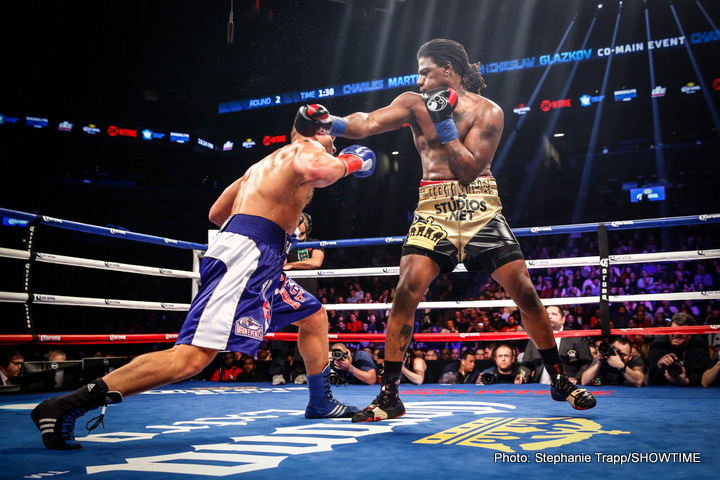 By Scott Gilfoid: IBF heavyweight champion Charles Martin (23-0-1, 21 KOs) says he’s going to be looking to make a big statement when he comes over to the UK in less than two months from now on April 9 to defend his title against Britain’s Anthony Joshua (15-0, 15 KOs) at the O2 Arena in London, England.

Martin, 29, says he wants to show the boxing world just how good he is, and by beating Joshua, he’ll be doing that. If Martin can come back to America with Joshua’s scalp in his possession, then it will be showing that he’s not a paper champion like some fans think he is.

Granted, beating Joshua will still not prove that Martin is in the same class as WBC heavyweight champion Deontay Wilder, but it’ll at least show that he can beat another highly ranked contender with an inflated ranking. Martin recently beat Vyacyheslav Glazkov bya 3rd round knockout last January.

Like Joshua, Glazkov came into the fight with Martin with a padded record of fodder opposition. Martin treated Glazkov with no respect in the ring, and immediately tore into him with power shots. By the time the 3rd round started, Glazkov was flopping around on the canvas like a seal and the fight had to be stopped because Glazkov couldn’t take anymore.

“I told my Team I wanted the best challenger possible for my first defence and Anthony Joshua’s name kept coming up,” said Martin. “I’m coming to the UK to make a statement that I am the best heavyweight in the world and no-one is taking my title. “I’m World Champion, so that doesn’t mean just sit back and make easy defences in the US, it means facing the biggest challenges out there. I respect Anthony Joshua and everything he has accomplished, but on April 9 he’s getting knocked out.”

Beating Joshua won’t make the kind of statement that Martin might think it will. I mean, it’ll make some fans impressed, but it’s not going to be a big deal because Joshua hasn’t done anything with his pro career yet. He hasn’t accomplished anything. To impress the boxing world, Martin will need to beat a talent like Deontay to shake the fans up. Beating a contender with a padded record like Joshua has won’t do much.

Joshua’s promoter Eddie Hearn has been putting him in with soft opposition from the word go. The one quality guy that Hearn matched Joshua up with, Dillian Whyte, came into the fight with a bum left shoulder and was only good for two rounds before his shoulder went out on him completely. I wonder if Hearn knew about Whyte’s injured shoulder before he put the fight together.

Some boxing fans are already blabbering that Hearn has basically purchased a world title for Joshua by getting him to come over to the UK to defend his own IBF title in front of Joshua’s fans rather than staging the fight in the most logical place by having it take place in the United States of America where Martin lives.

I don’t agree that Hearn has bought Joshua a title with this move. But I do think it’s going to be tough on Martin to keep his IBF strap given that he’ll be the visiting fighter, and may wind up on the losing end of a controversial decision if the fight goes to the cards. I mean, we’ve seen visiting fighters lose controversial decisions before when going to foreign countries to face their homegrown stars.

I’m not so much concerned about the fight going to the cards and Martin getting robbed as I am with the referee potentially halting the fight if Joshua throws a flurry of unanswered shots in the early going. Joshua, 26, has this little trick that he likes to do where he just throws a flurry of punches, and the referee frequently just stops his fights despite the fact that his opponent isn’t hurt and is just waiting for him to stop throwing.

It’s a technique that has worked for Joshua. A good referee wouldn’t stop a fight under those conditions, but we’ve been seeing a lot of Joshua’s fights halted after he unloads a bunch of arm punches. That’s why Martin is going to need to make sure that he doesn’t just stand there while Joshua throws his early flurry on cue, because I can definitely see the referee halting the fight whether Martin is hurt or not.

Martin is going to need to go after Joshua in the early rounds to try and bang him out. If Martin fights in a stupid manner like many of Joshua’s past opponents, then I can see Joshua winning by an early stoppage. Martin just needs to make sure that he doesn’t retreat to the ropes and let Joshua bang away at him because that’s not going to work out well for Martin if he does that. In other words, Martin has got to stay off the ropes at all costs because Joshua will throw a flurry of arms punches to get a stoppage if he fights with his back against the ropes.

« Miguel Cotto could fight for a world title in June

Chavez Jr: Canelo is going to catch Khan with an overhand shot »