Anthony Crolla vs. Ismael Barroso possible for May 7 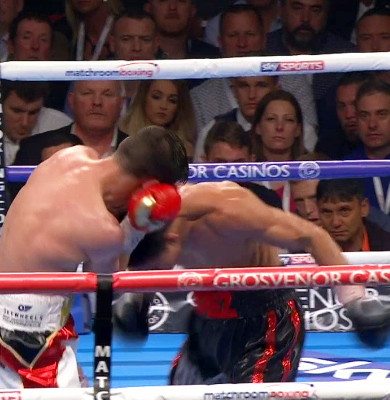 This is a fight that the 29-year-old Crolla has to get out of the way, as it’s a mandatory defense for Crolla. The only ways that Crolla could avoid the fight would be to fight one of the other lightweight champions in a unification match, give Barroso a step aside payment, or vacate the belt. Since it looks like none of those things is going to happen, Crolla is on course to face the power punching 33-year-old Barroso in May.

About the only thing positive for Crolla in the Barroso fight is that it looks like it’s going to be staged in the UK in front of Crolla’s fans. However, that does not mean it is going to help Crolla win.

It just means that he will have a mess of fans screaming for him on the night. It did not help Kevin Mitchell beat Barroso when the two of them fought each other last December on the undercard of the Anthony Joshua vs. Dillian Whyte card at the O2 Arena in London, UK. Mitchell was stopped in the 5th round Barroso.

All total, Mitchell was dropped down three times in the fight. Yeah, Mitchell’s fans were cheering him on, but it did not matter. Barroso was like a punching machine in that fight and he made easy work of Mitchell. The thing is, I see Mitchell as a better fighter than Crolla. If Barroso was able to do that to Mitchell, then what does it say about Crolla’s chances against Barroso? I hate to say it but I am not giving Crolla any chance at all of beating Barroso.

Crolla stopped WBA lightweight champion Darleys Perez in the 5th round last Nove,ber to capture the WBA champion. Perez made a dumb mistake of backing up to the ropes in the 5th round, and Crolla made him pay for the mistake by dropping him with a left to the body. Perez was too hurt to get back up after the knockdown. The fight was officially stopped at that time by the referee.

It really does not matter where the Crolla-Barroso fight takes place. Without punching power, Crolla is going to be in deep, deep trouble against Barroso.

I have heard how Crolla’s people believe that Barroso is vulnerable to body shots. I do not buy that at all. In order for Crolla to land his body shots, he will need to stand directly in front of Barroso. When Crolla does try and throw body shots, he’s going to be wide open for Barroso’s hard power shots that he’ll be continually pumping in. Like I said, Barroso is a punching machine that never stops throwing shots. If Crolla lowers his head to throw punches to the body, he’s going obliterated within one or two rounds by Barroso. It’ll be too easy for the Venezuelan fighter.