Pascal: I’ll be victorious against Kovalev this time 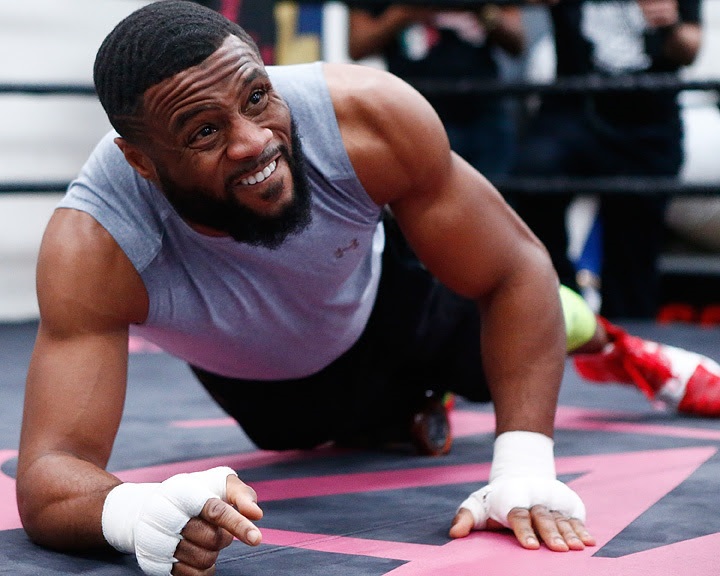 (Photo credit: Craig Bennett – Main Events) By Allan Fox: 33-year-old Jean Pascal (30-3-1, 17 KOs) has worked on the flaws in his game from his previous loss to IBF/WBA/WBO light heavyweight champion Sergey Kovalev (28-0-1, 25 KOs), and Pascal now feels ready and confident of beating the Russian fighter in their rematch this month on January 30th at the Bell Centre, in Montreal, Canada.

The fight will be televised on HBO Boxing. Pascal is trained by Freddie Roach, and they both know what Pascal did wrong last year in March in Pascal’s 8th round knockout loss to Kovalev.

Roach notes that Pascal came out looking to score a knockout over Kovalev instead of focusing on using his boxing skills like he should have. That was a mistake that cost Pascal a chance to win the fight, because he was never going to be able to beat a slugger like Kovalev at his own game.

“That is the goal right now to correct my small mistakes that I did on the first fight. That is why I think this time around I am going to be victorious,” Pascal said.

Roach is an excellent trainer, but he’s not someone that can will his fighters to fight above their capabilities. We saw some of that in Roach’s fighter Miguel Cotto’s recent loss to Saul “Canelo” Alvarez last November. Despite Roach coming up with the perfect game plan for Cotto to box instead of slug, he still wound up losing the fight by a 12 round decision. It shows you that Roach can only do so much with his fighters.

If they don’t have the talent, size, power or youth to win, they’re not going to no matter how good his fight strategy is. Roach is mostly known for his fight strategy rather than his great training techniques. He’s not considered to be a great teacher. He’s more of a strategy guy.

“I thought he [Pascal] fought a poor fight. I thought he was looking for a knockout too much and he can’t do that,” Roach said. “You go out there and box. Use your boxing ability. Beat this guy every round at a time. If a knockout comes that’s a bonus. He totally understands that.”

Pascal didn’t look much better recently in his controversial 10 round decision win over Yunieski Gonzalez last July. There was no improvement in Pascal’s game from his loss to Kovalev. It’s too bad that Pascal doesn’t have more time to work with Roach before facing Kovalev, because he’s going into this fight with little experience with Roach.

The taller 6’0” Kovalev was able to control the fight while on the outside using his jab to nail the 5’10 ½” Pascal over and over again. Pascal tried hard, but he couldn’t do much when Kovalev was on the outside.

If Roach wants Pascal to box Kovalev instead of slugging with him, it might not work out too well for Pascal. If he is going to box, then needs to attack with fast combinations and retreat to the outside so that he doesn’t get hit too much.

“A few things went wrong but they were very like minor details. Right now we have corrected those mistakes so I can be victorious on Jan. 30,” Pascal said