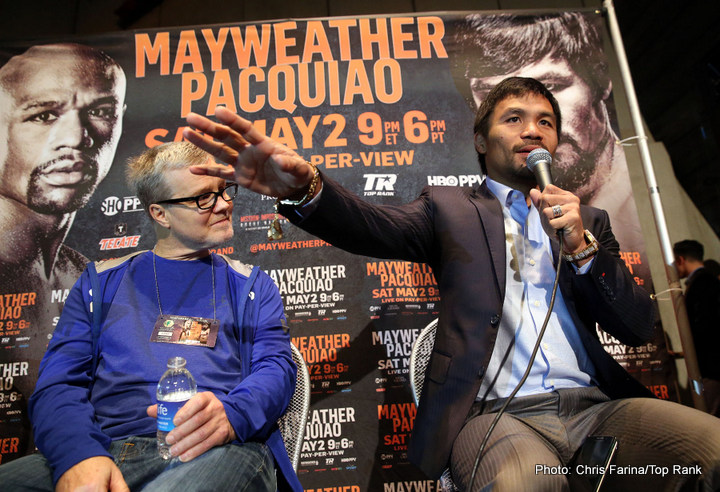 By Allan Fox: Manny Pacquiao (57-6-2, 38 KOs) disappointed legions of boxing fans this week with his selection of Tim Bradley (33-1-1, 13 KOs) for his final fight of his career on 4/9. The fans were expecting more from the 37-year-old Pacquiao, especially after the disappointment of his last fight against Floyd Mayweather Jr. in the “Fight of the Century” last May in Las Vegas, Nevada.

The fans felt ripped off at the high prices in how the fighters’ promoters hiked the price of the fight to unheard of heights. The fight then turned out to be a dud with neither guy doing much. Pacquiao admitted afterwards that he’d taken the fight with an injury to his shoulder.

With all that, the fans were hoping that both fighters would give back to the to make it by facing high opposition in their next fight, or at least fight someone that they’ve never fought before. We already saw what Mayweather did in adding insult to injury by selecting Andre Berto as his next opponent for his final fight of his career last September in Vegas. Now fans are seeing Pacquiao do roughly the same by picking Bradley, a fighter that he’s already beaten before and fought twice.

“So contrary to what some sectors believe, the choice of Bradley was not based solely on a business standpoint,” Pacquiao said to philboxing.com. “There were many factors our team, headed by promoter Bob Arum, considered. And the most important, of course, was what fight can give fans the enjoyment and excitement they expect, which, actually is my primary criteria in choosing an opponent,” Pacquiao said.

It is very hard to buy what Pacquiao is saying about wanting to give fans enjoyment with his selection of the 32-year-old Bradley, because he’s already gone down this street in fighting him twice before. What’s great one or two times becomes redundant and forlorn once it’s been done too many times. Pacquiao selecting Bradley just seems more like someone looking to get an easy payday rather than a fighter wanting to truly give the boxing fans someone worthwhile for them to see. The fans were calling for Pacquiao to fight guys like Terence Crawford, Adrien Broner and Keith Thurman. There were no fans calling for Pacquiao to fight Bradley. That was Pacquiao’s promoter Bob Arum who added Bradley to a three-fighter list that he put together for him to select from. It’s understandable for Arum to have chosen Bradley as one of the candidates because it helps his company Top Rank by Pacquiao selecting him. But it doesn’t mean that Pacquiao should have chosen Bradley. He could have insisted that Arum add more names to the list. Pacquiao had the power to add different fighters to the list that Arum gave to him. He didn’t have to just go with the three that were Arum gave to him to select.

Some fans see Pacquiao as a sell out after him picking Bradley and choosing to go out on an easy payday. It’s too bad Pacquiao didn’t want to take any risks by thinking outside the box and resisting the notion of fighting a guy that he’s already fought twice before. In a way, Pacquiao has been the perfect fighter for Arum, because he’s fought the guys that Arum has put in front of him in fighting them repeatedly. We’ve seen the many rematches that Pacquiao has had with Juan Manuel Marquez, Erik Morales, Bradley and Marco Antonio Barrera. We’ve seen Pacquiao waste valuable fight dates in his career by fighting Top Rank guys with zero popularity in Brandon Rios and Joshua Clottey.

“Many, indeed, seemed dissatisfied with the choice, but what I can assure everybody is we made that decision having the interest of the boxing public in mind,” Pacquiao said.

When Pacquiao says “we made that decision” in selecting Bradley, you have to wonder who he is speaking about. Is he speaking of him and Arum, or is he talking about him and his adviser Michael Koncz. It doesn’t seem to matter though, because the boxing fans are disappointed in this selection, as many of them felt let down that this is the fight that Pacquiao is putting on after his overpriced disappointing fight against Mayweather.

« What’s next for Gennady Golovkin?

Did Mayweather’s lack of interest cause Pacquiao to choose retirement? »