Felix Verdejo vs. William Silva on February 27th at MSG 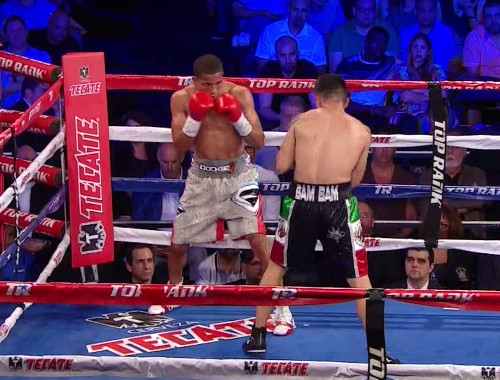 This is a decent opponent for the 22-year-old Verdejo, but not the kind of opposition that boxing fans want to see him fight against. The fans want to see the Puerto Rican native fight higher ranked opponents, preferably world champions like WBO champ Terry Flanagan, WBC champ Jorge Linares or WBA champ Anthony Crolla.

With Manny Pacquiao retiring from the sport after his April 9th fight against WBO welterweight champion Tim Bradley, Top Rank promoter Bob Arum is going to need to speed up Verdejo’s career if he wants to turn him into a pay-per-view attraction to take the place of Pacquiao. Arum will also need to have Verdejo move up in weight to light welterweight and then welterweight for him to pick up fans. The lightweight division isn’t a popular one with the casual boxing fans.

Fighters need to be at least in the 140lb division to interest fans, and they need to be fighting welterweights. Verdejo arguably has a better chance of being a future than Crawford, who doesn’t have the one-punch punching power that Verdejo possesses.

Silva, 28, has a nice resume, but his wins have come against obscure fighters in Brazil rather than recognizable contenders. In his last four fights, he’s beaten Adam Mate, Pabli Martin Barboza, Hector Carlos Santana, and Rodrigo Monteiro. You can throw out virtually all of Silva’s past wins and see him as a near novice because he’s not fought anyone near good enough to learn anything about him.

“Per Carl Moretti, Diamante Verdejo will face William Silva on HBO Boxing on Feb.27 at The Garden Theater. #boxing,” said Dan Rafael on his Twitter.

In other news, the purse bid for the Arthur Abraham vs. Gilberto Ramirez fight has been postponed until next week on Monday, according to Rafael. It was scheduled for this Friday. Top Rank promoter Bob Arum is interested in having Abraham defend his WBO super middleweight title against Ramirez on the undercard of Manny Pacquiao’s fight against Tim Bradley on April 9th at the MGM Grand in Las Vegas, Nevada.

Abraham wants to fight Ramirez in March in Germany. Arum is going to need to come up with some good money to get the Abraham vs. Ramirez fight in the U.S, because you can bet that Abraham’s management will be looking to stage the fight in Germany, where Abraham brings in large audiences.

Arum believes that Ramirez can be another Saul “Canelo” Alvarez. Ramirez could one day become a popular fighter if he can capture the WBO title off of Abraham and hold down the title for a number of years. It’s going to be tough though, as the 24-year-old Ramirez still looks very green at this point in his career.

« David Haye: “I’m going to rip out the Haymaker and get De Mori down for the count”