Fighting for the vacant WBC Welterweight World Title in the first Premier Boxing Champions (PBC) on FOX event, Guerrero came out aggressively in the first four rounds using a solid jab and strong over hand left hands to control the action.

Garcia acclimated well to the pressure in the fifth round, finding his range and using potshotting right hands to halt the oncoming Guerrero. The theme would play itself out during the second half of the fight as well with Garcia dominating the action. Sensing the fight slipping away, Guerrero came on strongly in the final round with both combatants fighting to the bitter end as the crowd stood and roared with approval.

Said Garcia following the victory, “It was what I expected. I knew I would win at least eight or nine rounds. I knew there would be some head butts in there. He head butted me so much on my forehead.

“I was throwing my combinations, using my legs like my dad told me to do. I knew he was going to come to fight. He’s a rugged warrior. I’m back where I belong. I am now a two-division world champion.

“Guerrero is tough. No one has ever stopped him. He came to fight; he was in shape. I’m taking nothing away from him. I am glad it went the way it went. I just want to take some time off, let my body heal and take one day at a time.”

Father/trainer Angel Garcia said, “I thought it was a good fight. There were a lot of head butts. He is a dirty fighter. At the end of the day, Danny pulled it off, it doesn’t matter what people say.

Stated a disappointed Guerrero, “I want a rematch and that’s it. Not one person out there thought Danny won, but his team. I pressured him, I nailed him, busted his body up. I
out-jabbed him.

“It’s all for the fans. That’s why they bring me back. They love it and they enjoy it. They were entertained tonight. They thought I won the fight.”

Punch stats showed Garcia with a wide margin of power shots landed, 33 percent to Guerrero’s 24 percent.
In a 10-round welterweight battle, “Sergeant” Sammy Vasquez of Monessen, Pennsylvania improved to (21-0, 15 KOs) with a sixth round stoppage of Aron Martinez, (20-5, 4 KOs) of Michoacan, Mexico. 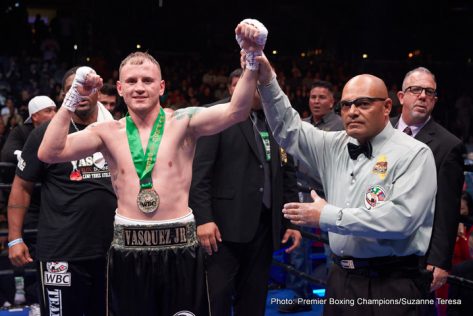 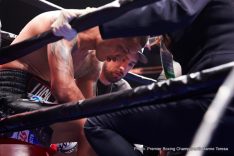 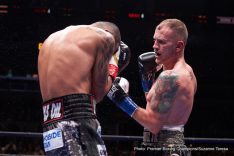 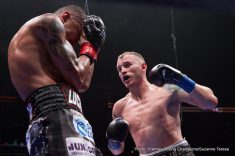 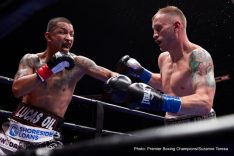 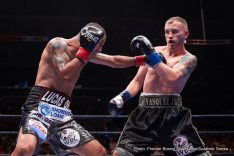 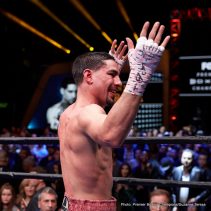 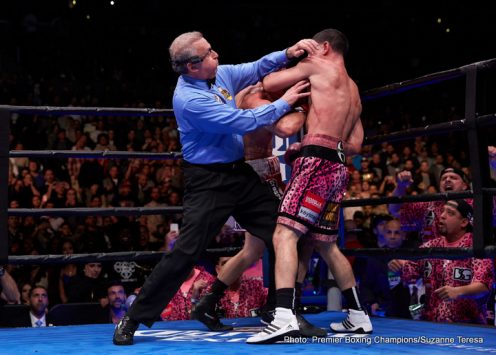 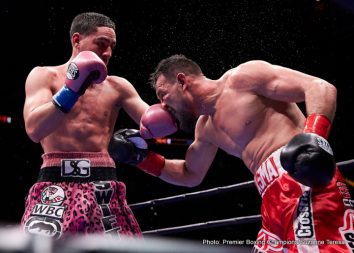 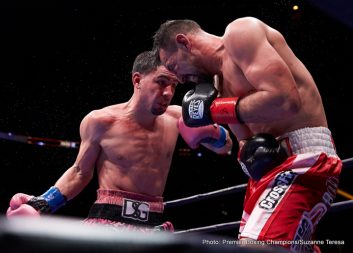 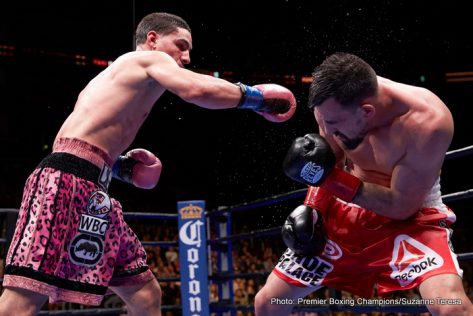 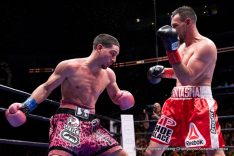 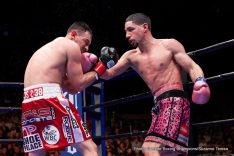 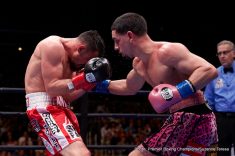 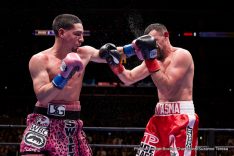 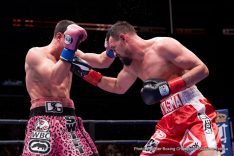 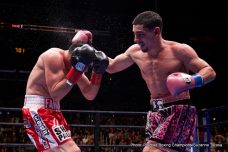 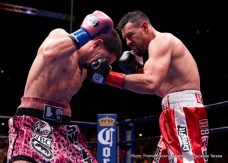 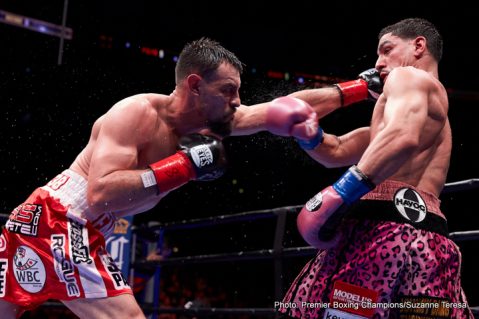 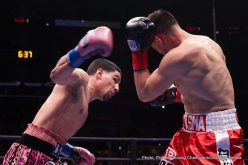 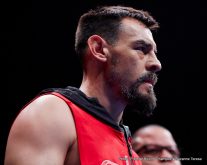 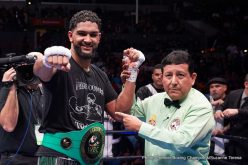 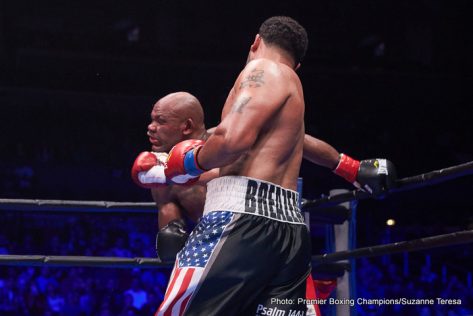 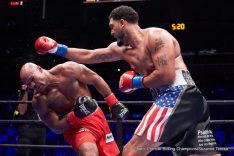 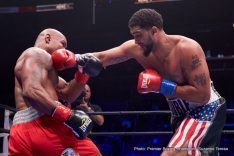 Peppering Martinez with a piston like jab, Vasquez controlled the action using his full skillset to
score points at will against the slower Martinez. Staying the aggressor through round four and five, Vasquez continued to beat Martinez to the punch using a battering right hook.

The bout ended abruptly as Martinez was not able to continue following the sixth round due
to a left elbow injury.

Said Vasquez, “Of course I won the fight, but Martinez is a tough competitor, a tough Mexican fighter. I tried to mix it up with him a little bit, but there was no sense in me trying to do that. I could have easily outboxed him, which I started to do, but I wanted more. I was just starting to warm up.

“A victory feels good of course, but I wanted more. I wanted to go 12 rounds, if it would have lasted that long. I wanted a very decisive win. Unfortunately, he got hurt, but every fight is a learning experience for me.

“It’s on to the next chapter and I’m ready for all of the guys at the top. Eventually, I’m going to get them.”

A disappointed Martinez stated, “I hurt my elbow. I couldn’t throw my jab. I started to feel it in the third round. The doctor stopped it.

“I was doing okay. Not my best. I tried, but once I hurt my elbow, I knew it was going to be tough to continue.”

Opening the telecast was an outstanding heavyweight back and forth brawl between
2012 U.S. Olympian Dominic “Trouble” Breazeale, (17-0, 15 KOs) of Glendale, California and Amir “Hardcore” Mansour, (22-2-1, 16 KOs), of Philadelphia.

From the first bell it was readily apparent that both big men would throw bombs throughout
with Mansour in particular throwing caution to the wind.

However, Breazeale confidently kept his composure, fighting his way back in the fourth. With Mansour apparently running out of gas in the fifth round Breazeale went to work, drilling the
muscular southpaw with battering uppercuts and hooks on the inside.

Following the fifth round, Mansour bit through his tongue and cited a jaw injury (which was not broken) and could not continue as the valiant Breazeale was awarded the well-earned victory.

Said a happy Breazeale, “I didn’t know what happened. Usually when they wave off a fight, it’s over. Shows I have punching power after all.

“I’ve been on the canvas before. I just had my hand in the wrong place. I knew I could get back up. I’m in great shape. It happens to the best of us.

“I’m a fighter at heart and I wanted to just get in there and brawl, but I new I had to stick to the game plan and box him.”

The event was promoted by TGB Promotions and sponsored by Corona.

Danny Garcia not interested in Khan or Guerrero rematches »