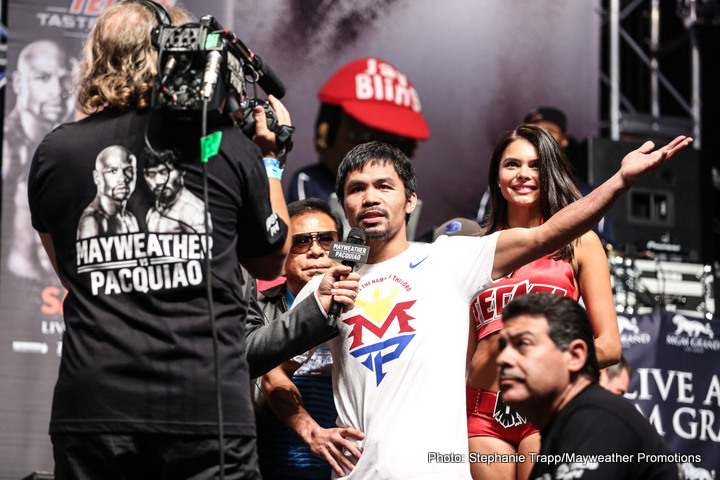 By Chris Williams: With Manny Pacquiao (57-6-2, 38 KOs)) deciding not to reveal who his next opponent is tonight, as his promoter Bob Arum had previously said he would reveal, there’s talk that Pacquiao will be facing WBO light welterweight champion Terence Crawford (27-0, 19 KOs) next rather than WBO 147lb champion Tim Bradley.

There were reports that Pacquiao had made up his mind that he was going to be fighting Bradley in a third fight on April 9th next year at the MGM Grand in Las Vegas, Nevada. After that fight, Pacquiao would then retire from the sport to focus on politics in the Philippines.

Arum had told ESPN this week that he was going to be informing the boxing public who Pacquiao’s next opponent will be on tonight’s Top Rank truTV card in San Juan, Puerto Rico. However, Arum’s publicist Fred Sternburg then should an e-mail to the boxing sites saying that Pacquiao hadn’t yet decided who he wanted to fight next.

According to fight hype, Pacquiao wanted to fight Bradley next, but his promoter Arum wanted him to fight Crawford. By Pacquiao not announcing his fight with Bradley tonight, it makes it more likely that Crawford is now the guy that Pacquiao will now be fighting next. Pacquiao couldn’t reveal that he was caving in to Arum’s wishes and choosing to fight Crawford in an announcement tonight on truTV, because Bradley is working the TV card as a broadcaster.

It would have been a tremendous letdown for Bradley for Pacquiao or Arum to reveal that Crawford is the one that got the fight instead of him. So instead of the news for Pacquiao’s next fight being revealed tonight, it’s going to be revealed later.

We’ll still likely receive the announcement soon though, because the Pacquiao-Crawford fight needs to be announced as soon as possible in order to market it. Crawford isn’t a well-known fighter with the casual boxing fans, and Arum is going to have his work cut out for him in trying to drum up any interest in the fight at all. 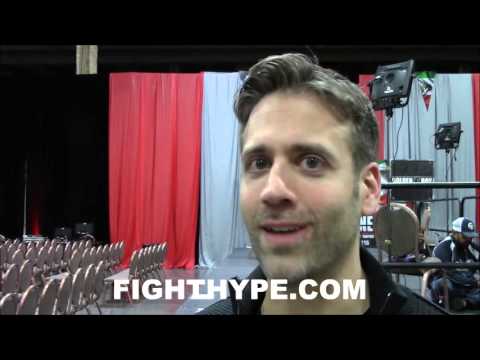 We’re basically talking Pacquiao vs. Chris Algieri here with the Pacquiao vs. Crawford fight. Crawford is about as well-known as Algieri, and there’s just no way that the fight is going to bring in a lot of PPV buys. I think Arum is figuring that it won’t sell a lot of PPV buys, but it will make Crawford better known to the casual boxing fans and someday the fans might want to purchase his fights on HBO. For Arum to have any chance of that happening, Crawford will need to beat Pacquiao and take his scalp.

Pacquiao is so old now and is coming off of a loss to Floyd Mayweather Jr. and a bad shoulder injury. I think Arum is kidding himself if he believes that Crawford is going to become a star off of the Pacquiao fight. The timing is horrible. The right time to make the Pacquiao-Crawford fight would have been before Pacquiao was beaten by Mayweather, not after. The only thing Crawford is going to achieve in fighting Pacquiao now is to get a small payday and then hope he can somehow beat him.

Instead of placating Arum, Pacquiao should be holding the 84-year-old Arum’s feet to the fire to get him a real name to fight on April 9th instead of fighting Crawford, which just comes across like Pacquiao’s doing Arum a favor by fighting his little known fighter. Pacquiao should be telling Arum that he wants either Mayweather Jr. or Saul “Canelo” Alvarez, because those are the guys that the boxing world as a whole wants to see.

I would say Gennady Golovkin, but some boxing fans would complain and say he’s too big for Pacquiao. The same fans would then say Canelo isn’t too big for Pacquiao despite the fact that Canelo is bigger than Golovkin in terms of weight. But Pacquiao couldn’t go wrong by fighting Canelo, Mayweather or Golovkin in his final fight. He could go wrong if he winds up facing Crawford or Bradley for his final fight because the money won’t be as good because neither of those fighters is hugely popular.

Crawford is popular in Omaha, Nebraska. But Pacquiao needs someone who is popular nationally in the U.S, and you can’t say that Crawford and Bradley have huge fan bases. They’re just a couple of guys in Arum’s Top Rank stable that bring in decent but far from great ratings.

« Donaire vs. Juarez tonight on truTV