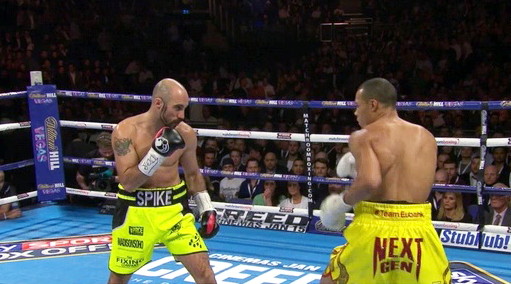 By John Spandley: Saturday nights show at the O2 arena promised fireworks on many fronts with a talented and stacked undercard and fireworks we sure had.

The whole show from start to finish was pure boxing gold and value for money the British public have seldom seen when spending there hard earned money on a PPV event. I must admit I was one of the sceptic’s that was far from happy to pay for an event with no world titles up for grabs. For that I stand corrected and take my hat off to matchroom for a very well matched card.

We witnessed the “The Bomber” Bellew clinch the European title with a gritty hard fought victory over a game and talented but under rated fighter that is Masternak. Both men fought hammer and tongs in this fight and it proved that the Liverpudlian just had more in his locker when it came to skill set.

Another exciting fight was that surprised many people was Campbell VS Mendy. The widely tipped future star and Olympic champion Luke Campbell recently came off of a real testing grudge match against his Hull rival Tommy Coyle which many people believed was a coming of age fight. Unfortunately for Luke he slumped to a fair split decision after raising himself from the canvas. Looking at this fight in the long term I am sure this will bode him well for the future providing there are no long term mental issues off of the loss. In this testing time for the young British hopeful we will now get the chance to see if “Cool Hand” Luke has the champion qualities to come back from a humbling defeat as he did on Saturday.

Also not to be forgotten was the clash of the evening which was Joshua VS Whyte, filled with such bad blood you could smell it through your TV set.

The main focus of this article though is the display we saw from the electric and spiteful Eubank JNR, who walked into the O2 arena on Saturday promising the fans an absolute belter after his Irish opposition had notably got under the young Eubank’s skin. With the Kissing escapades at the weigh in and JNR`s father ever craving the limelight it left many people asking the question would JNR come unstuck? Will the night get to him? Will he take the build up taunts literal as he did with Billy Joe and let this affect his performance? And finally, will the new and improved Eubank backroom staff pay dividends? 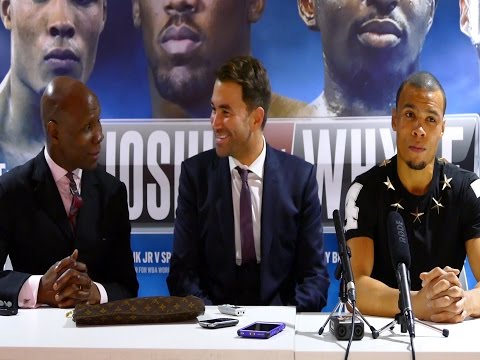 The first ring walk was handed to O`Sullivan. The man who had been goading Eubank JNR on various social media platforms to engineer a fight with the more commercially attracting fighter. As the trap doors opened up very gladiatoresque for the Irishman the world could see that this man came to win or go out fighting.

The following ring walk from Eubank JNR was polar opposite in comparison instead of a steely vengeful look that we would all be expecting we ended up with JNR standing at the entrance with his father peering over his shoulder shuffling to the beat of Dr Dre – Still Dre. This came across as a bit of an odd ball moment but you have to admire the man for his confidence in giving the fans entertainment.

“Next Gen” hopped over the ropes and shadow boxed a flurry of uppercuts to the crowd to show off his blistering speed as he waiting for the MC to announce the fighters in the squared circle. Once both men were in opposite corners staring into each others eyes sadistically you could see that neither man wanted to hear the final bell.

The first bell sounded and the opening moments were a cautious and tense display with O’Sullivan baiting his opponent with a wry smile on his face and constantly poking out his tongue. Eubank Jnr as he has proved in 90 percent of his previous outings would willingly oblige to a slugfest and proceeded to shoot fire with fire on the inside. Both men fought tooth and nail with no one backing up until Jnr got hit a thunderous left hand that had his legs start to dance from underneath him, then proceeded with a retaliation from JNR followed by a shuffle at the final bell as a mind game to try to prove to his opposite man that whatever he threw he could take.

The second round began how the first ended with both men determined to take the others head off with either a destructive haymaker or a sickening uppercut, throwing the jab way out of the picture. As the second round progressed it was evident that “Next Gen” had the superior firepower in his arsenal and unloaded a flurry of uppercuts that looked to cut “Spikes” night short but the Irish warrior bravely fought on.

At this pace it looked like the young Eubank could have maybe over done it and gassed himself out in his bid to entertain the crowd but again we were all proved wrong as this was sustained throughout the fight. Spike had truly turned this into a war over power punches with every punch designed to cut the night short. Spike threatened to initiate a shock come back a couple of times, most notably with another left hook in the third.

After the opening three rounds, even though game O`Sullivan had run out of answers and proceeded to walk onto a barrage of punches time and time again. Even with O`Sullivan standing and taking it bravely with the fantastic chin that he has, it was evident that if allowed to carry it could have got very dangerous and been reminiscent of that very sad night where Snr hospitalized the talented Michael Watson.

After one more brave round of exchanges Spikes corner men decided to take out Spikes gum shield and signal to the referee that the fight was over. A very wise move to let there man showcase his bravery before it went to far.

After the fight the two displayed great sportsmanship putting things to bed with a handshake.
Chris Eubank Jnr answered many questions that night but one question he did answer is that GGG may have to wait a little while longer but he does have that star quality.

For the resilient Gary O`Sullivan I have no doubt we will witness this fighter in many more grueling encounters.

« Bryant Jennings vs. Luis Ortiz this Saturday on HBO