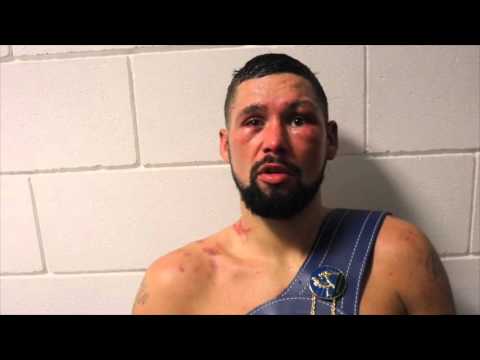 By Scott Gilfoid: Unbeaten knockout artist #2 WBA Ismael Barroso (19-0-2, 18 KOs) made easy work of #10 WBA Kevin Mitchell (39-4, 29 KOs) in destroying him in a 5th round knockout on Saturday night to win the interim WBA World lightweight title at the O2 Arena in London, UK.

The 32-year-old Barroso knocked Mitchell down three times in the fight. In the 4th round, the southpaw Barroso dropped Mitchell down twice. After the second knockdown, referee Howard Foster halted the fight at 2:40 of the round. The first knockdown of the 5th came from a simple southpaw jab from Barroso. Mitchell couldn’t handle the shot. I think he was still shell-shocked from getting dropped in the previous round in the 4th.

Barroso is bad news for WBA lightweight champion Anthony Crolla, because this guy has tremendous punching power. I don’t know how the feather-fisted Crolla is going to be able to handle his power. Crolla was interviewed after the fight to get him views about Barroso. He said “Maybe Kevin gave him too much respect.”

Oh boy, Crolla thinks that Mitchell should have slugged with Barroso. That sounds like a failure of a plan. If Crolla is going to fight like that against Barroso, he’s going to get blasted out quick by the hard hitting Venezuelan fighter. You’ve got to feel sorry for Crolla because he just won the WBA title recently with a stoppage win over Darleys Perez. But now Crolla is going to have to fight Barroso, and that’s bad for Crolla. I can’t see him going more than five rounds with Barroso at best.

In an expected victory, Tony Bellew (26-2-2, 16 KOs) used his superior punching power to defeat a very average looking Mateusz Masternak (36-4, 26 KOs) to win a close 12 round unanimous decision to capture the vacant EBU cruiserweight title. The final judges’ scores were 115-112, 115-112, and 115-113. Bellew hurt Masternak with a right hand in the 12th. Masternak was able to make it out of the round barely.

“I just wanted to fight the best fighter to see how good I am,” Bellew said after the fight.

I don’t want to rain on Bellew’s parade, but Masternak is not the best cruiserweight in the division or even close to being the best. There are some contenders in the cruiserweight division that would have likely made easy work of Masternak tonight. Masternak is just a guy that was recently beaten twice by other fighters. I still don’t know why Bellew’s promoter Eddie Hearn selected Masternak as his opponent tonight instead of a higher grade fighter like Olesandr Usyk. This guy recently beat one of the fighters that defeated Masternak in destroying Johnny Muller.

Masternak looked horrible, as he showed no punching power at all period. The only thing he could do well was jab, which is pretty much all he did in the fight.

By the end of the fight, Bellew’s eyes were badly bruised and he looked terrible.

Former heavyweight world title challenger Dereck Chisora (24-5, 16 KOs) defeated Jakov Gospic (16-14, 12 KOs) by a third round knockout. Chisora could find himself fighting a lot of the big names in the UK in the near future if he can keep winning. Matchroom Sport promoter Eddie Hearn said he might possibly match his heavyweight Anthony Joshua up against Chisora in 2016 if Joshua captures the British heavyweight title tonight in his fight against Dillian Whyte.