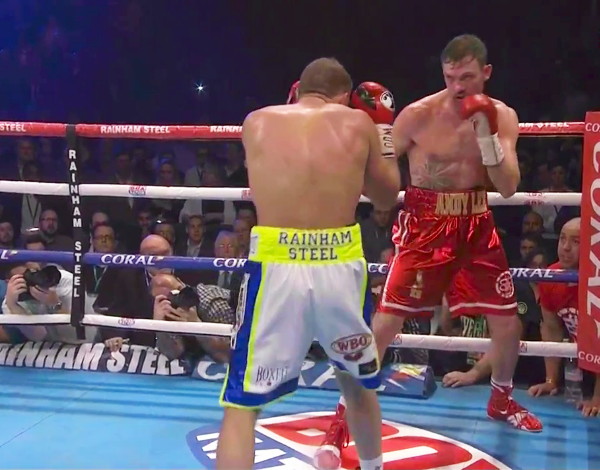 By Scott Gilfoid: Andy Lee (34-3-1, 24 KOs) showed a lot of heart in coming back from two knockdowns in the 3rd round to almost rally to get a victory over challenger Billy Joe Saunders (23-0, 12 KOs) last Saturday night at the Manchester Arena in Manchester, UK.

Lee lost his WBO middleweight title in the process of getting beaten by a 12 round majority decision. However, Lee feels he finished stronger than Saunders, and he’d very much like a rematch to avenge his loss and recapture his WBO strap.

Saunders spoke of possibly giving Lee a rematch in London if it makes good business sense. There are not a lot of good money options for Saunders unfortunately, given that he’s not interested in facing IBF/IBO/WBA middleweight champion Gennady Golovkin in a unification fight.

“The two knockdowns cost me the fight,” Lee said at the post-fight press conference. “I can’t complain about the decision. I would like another go at it. I felt I finished stronger.”

Saunders got hit hard by a left hand shot from Lee while trying to KO him after the second knockdown. If you look at it a second time, you can see Saunders visibly backing off after getting hit hard by a left hand from Lee. Saunders said he wasn’t hurt by the shot, but it doesn’t matter. The punch from Lee succeeded in causing Saunders to permanently back off for the remainder of the fight.

“A rematch could even go,” Saunders said. “If we could do a big venue in London, we’ll talk about that as well. Perhaps if the business works, we could do a rematch,” said Saunders.

Saunders’ options for his next fight come down to the following fighters: Lee, Chris Eubank Jr. or Tommy Langford. That’s pretty much it for Saunders as far as him fighting UK fighters that the British boxing fans would be interested in seeing him fight. Since it looks like Saunders isn’t interested in taking on any risky contenders or champions unless their names are Saul “Canelo” Alvarez or Miguel Cotto, it leaves out some appealing fighters like David Lemieux or Willie Monroe Jr.

I can’t see Saunders agreeing to fight either of those guys because their potentially difficult fights for a guy like Saunders. Lemieux would be a very tough fight for Saunders because he’s got a decent chin and wouldn’t be afraid to jump on Saunders and make his life miserable with shot he hits him with. That nothing of a right hand that Saunders dropped Lee with would bounce of Lemieux and do nothing to him. It would be like a speed bump for Lemieux, who would take the shot and really work Saunders over.

Unfortunately, I don’t see Saunders wanting any part of fighting guys like Lemieux or Monroe Jr. For that reason, I see him fighting Lee, Eubank Jr. or Langford in March. Of those fighters, Eubank Jr. would probably give Saunders his biggest payday if Eubank Jr. didn’t ask for too much money.

I wouldn’t be surprised if Eubank Jr prices himself out though, because he’s got the option to fight for a world title against WBA regular champion Daniel Jacobs, and that freedom of having that option might cause him to ask for too much money for a second fight against Saunders.