By Chris Williams: Trainer Freddie Roach says he’d leaning in the direction of hoping that Manny Pacquiao (57-6-2, 38 KOs) faces WBO light welterweight champion Terence Crawford (27-0, 19 KOs) in his next and perhaps final fight of his career on April 9th next year.

Roach previously said that he wanted Pacquiao to fight former WBA/WBC light welterweight champion Danny Garcia next year, because he liked the idea of Pacquiao fighting a brawler. But in choosing Crawford, Roach is now interested in having Pacquiao fight a counter puncher.

Pacquiao has always had problems with counter punchers during his career, so it’s hard to understand why Roach suddenly is interested in having him fight Crawford instead of someone who is made to order for him like Danny Garcia.

“I like Crawford. I don’t pick the opponents for Manny,” Roach said to Fighthype. “That you man he [Crawford] fought was one of Manny’s old sparring partners, and I don’t remember him ever making it past two rounds with Manny. I’m leaning towards Crawford. I kind of like that fight for Manny. But again, Arum and Manny will talk that out. Arum will call me and ask me who my choice is, but he doesn’t always mean it,” Roach said.

By Roach suddenly showing interest in Pacquiao fight Crawford, he’ll likely be seen in a favorable light by Pacquiao’s promoter Bob Arum, who seems keen on the idea of matching Pacquiao against Crawford next. Arum also likes the idea of Pacquiao fighting WBO welterweight champion Tim Bradley if he gets past Brandon Rios this Saturday night.

Amir Khan, who initially was the lead guy in the list of candidates for Pacquiao’s April fight, rarely gets his name mentioned that often. It looks like Khan has been passed up in favor of Crawford or Bradley. Roach says the decision of who Pacquiao will fight next will be made by Pacquiao and Arum when they meet up with each other to talk about who the opponent will be.

If Pacquiao is interested in making his promoter Arum happy, I think picking Crawford will do the job. If not him, then selecting Bradley will likely make Arum happy as well. The bigger money fight would obviously be against Khan, because it would attract the most interest both nationally and internationally. But Pacquiao [probably doesn’t need a lot of money now that he made a killing in his last fight against Floyd Mayweather Jr. in their fight last May in Las Vegas, Nevada.

Pacquiao made over $100 million in that fight. Just how much he has left of the $100M is unclear. If he spent a good portion of it on paying down bills or buying houses or whatever, then it might be in his best interest to take the Khan fight so that he can make as much money as possible for his next fight.

Deontay Wilder to fight on January 16th at Barclays Center, in NY » 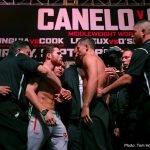