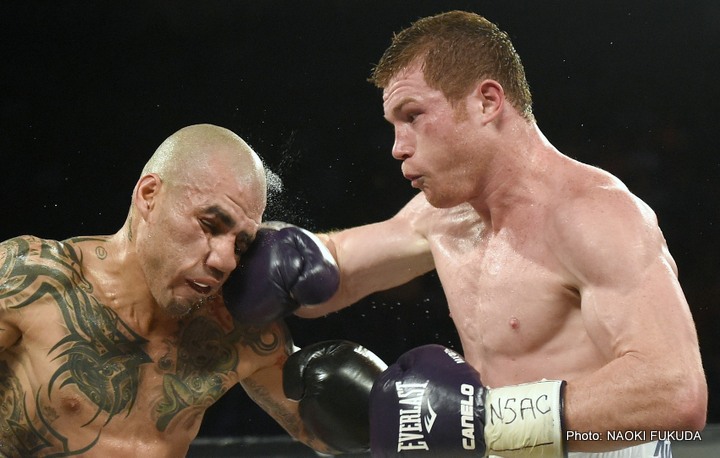 By Dan Ambrose: Two days after his 12 round unanimous decision loss to the popular Saul “Canelo” Alvarez (46-1-1, 32 KOs) from last Saturday night, Miguel Cotto (40-5, 33 KOs) isn’t happy with the decision that was handed down by the three judges in his fight on HBO PPV.

Cotto thinks he did more than enough to win 8 of the 12 rounds, and he’s not pleased that he was on the receiving end of a decision loss. The judges scored the fight for Canelo by the scores of 119-109, 118-110, and 117-111. While most boxing fans felt that Canelo had done enough to deserve the win, fans didn’t agree that he won by that wide of a margin.

The fans felt that Canelo won a narrow victory, and was able to pull out the decision by getting the better of Cotto in last three rounds.

“When you have the opportunity to dominate eight of the twelve rounds, you don’t expect anything less than victory,” Cotto said to primerahora.com.

The judges were perhaps impressed with the 25-year-old Canelo’s better punching power, and with the way that he was able to use his superior size to take Cotto’s shots like they were nothing. It looked like a fight between a small junior middleweight facing a full blown light heavyweight. Cotto didn’t have the weight behind his punches like Canelo did.

It was very clear that Canelo had a huge size advantage in the fight, and that he basically won the fight off of his weight advantage rather than him being a better fighter. My thoughts are that if Cotto and Canelo came into the fight weighing roughly the same thing last Saturday night, Cotto would have won.

Eventually, Chavez Jr. could no longer make the weight for the 160lb division, but instead of moving up in weight and facing guys his own size, Chavez Jr. has continued to mostly face smaller guys for some reason. He had that one fight against a guy his own size in Andzej Fonfara earlier this year, but other than that, he’s had three fights against smaller guys.

Cotto might get a chance for a rematch with Canelo. Golden Boy Promotions CEO Oscar De La Hoya has refused to rule out a rematch between the two fighters. He says wants to wait and see what the pay-per-view numbers are before he makes a decision about whether he should look to stage a second fight between them.

I don’t think there is a strong demand for a second fight between Cotto and Canelo, especially if De La Hoya wants to make it another PPV fight. It’ll look too much like a money grab if he goes ahead and has Canelo fight Cotto again. Besides that, there wouldn’t be a title on the lone for a second fight, because Canelo will be stripped of his WBC title if he fails to defend it next against WBC mandatory challenger Gennady Golovkin.

Was the “rejuvenated Cotto” all hype? »