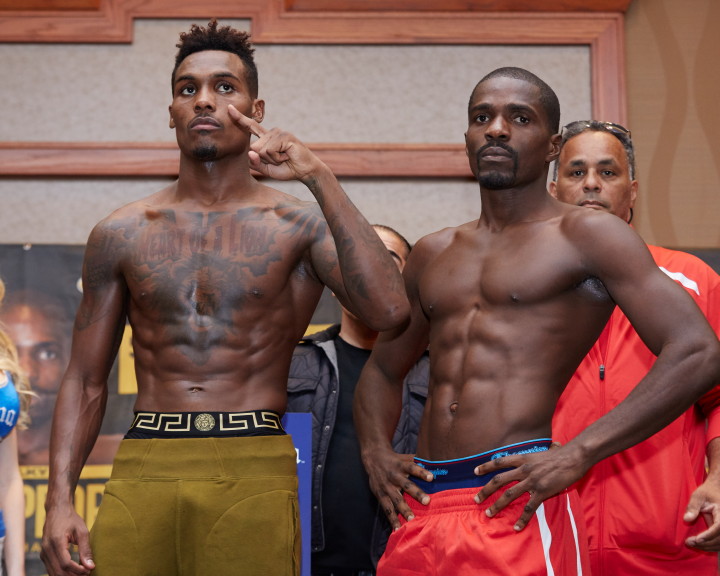 (Photo credit: Suzanne Teresa/Premier Boxing Champions) By Allan Fox: IBF junior middleweight champion Jermall Charlo (22-0, 17 KOs) initially came in over the 154lb limit by .4 pounds on his first try at Friday’s weigh-in, but then he was able to come back later and make weight at 154 pounds on his second attempt for his title defense against #14 IBF fringe contender Wilky Campfort (22-1, 12 KOs) for their fight on Saturday night on Premier Boxing Champions on NBC from The Bomb Factory, in Dallas, Texas.

The 31-year-old Campfort comfortably made weight in coming in at 153.2lbs.

This is a title milking fight for Charlo, who is capable of beating much better than Campfort if his adviser had selected a better opponent. It’s fortunate for Charlo that NBC agreed to televise this fight because it’s not a good fight on paper. In fact, it’s a mismatch.

Campfort isn’t a well-known opponent, and it would have been much better had Charlo’s management put him in with the likes of #3 IBF Michel Soro, #6 IBF Julian Williams, #7 IBF Vanes Martirosyan, #9 IBF Joshua Clottey, #11 IBF Austin Trout or #12 IBF Willie Nelson.

Charlo, 25, defeated former IBF 154lb champion Cornelius Bundrage by a 3rd round knockout last September to win the IBF junior middleweight title. Charlo knocked Bundrage down in rounds 1, 2 and two times in the 3rd round. The fight was then halted after the second knockdown in the 3rd round.

In the co-feature bout, unbeaten #10 IBF welterweight contender Errol Spence Jr. (18-0, 15 KOs) came in .2 pounds over the 147lb weight limit for his 12 round IBF welterweight eliminator bout against #13 IBF Alejandro Barrera (28-2, 18 KOs). Spence lost the .2lbs and came back to make the 147lb limit on his second weigh-in attempt. The 29-year-old Barrera easily made weight in coming in at 146.4lbs. 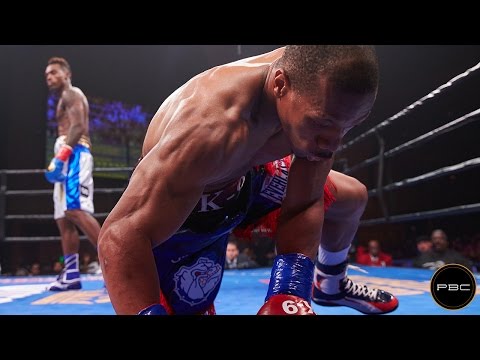 This card would have been a lot better if they had matched Spence against Charlo, and had Campfort face the guy that Spence is scheduled to fight in Barrera. The card has two mismatches in the main event and co-feature bout, and it would have been much better if they had rolled the dice by matching Charlo and Spence against each other instead of having them put in with guys that aren’t in their league.

Even 154lb prospect Erickson Lubin would have been a much opponent for Charlo to fight instead of letting him toy with Campfort for 12 rounds. I don’t think the fight is going to go 12 rounds, but I do believe that Charlo will have an easy time beating him.

« Klitschko expects Mayweather to come out of retirement

Canelo should wait until Golovkin is 35 before fighting him, says Garcia »