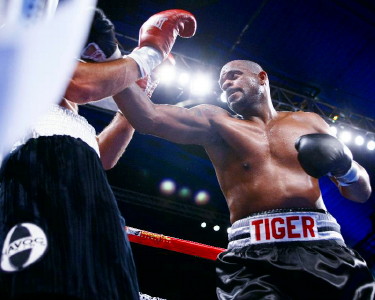 By Scott Gilfoid: #9 WBC Tony Thompson (40-5, 27 KOs) says he’s planning on beating WBC heavyweight champion Deontay Wilder (35-0, 34 KOs) for his WBC title, and then using his WBC belt to get a third fight against IBF/IBO/WBA/WBO heavyweight champion Wladimir Klitschko (64-3, 53 KOs), who has already knocked him out twice in stopping him in 2008 and 2012.

Thompson, 44, isn’t satisfied with the outcome of those two fights, and he wants another crack at Klitschko to improve upon the performances he had the two previous times. There’s a chance that the 6’5” Thompson could be an opponent for Wilder in his next proposed fight in January 2016 or sooner.

Wilder wants to fight one more time before he faces his #1 WBC mandatory challenger Alexander Povetkin in early 2016. The only thing that could stop Wilder, besides his adviser Al Haymon, is the World Boxing Council, who might potentially keep him from making another voluntary defense of his title.

“My plan is to knockout Deontay Wilder, take his belt, and use it as enticement to fight Klitschko for a third fight,” Thompson said to Fighthype. “I’m still not satisfied with the outcomes. Deontay Wilder is America’s champion, but he’s not the heavyweight champion of the world. Wladimir is the heavyweight champion of the world. That’s who I’m chasing through Deontay. Deontay is like three inches taller than me. We sparred for the Klitschko fight,” Thompson said.

Thompson is kind of getting ahead of himself right now because he has a scheduled 10 round fight this Friday night on October 30th against Malik Scott (37-2-1, 13 KOs) on Premier Boxing Champions on Bounce TV from The Venue at UCF, in Orlando, Florida. Thompson needs to win that fight for him to be under consideration for the talented 6’7” Wilder.

Wilder will be a guest commentator this Friday night for the Thompson-Scott fight, so it should be interesting to hear what he has to say about Scott.

If Thompson can’t win that fight, then he’s really out of luck and won’t be able to do anything.

The 6’5” southpaw Thompson doesn’t have much going for him as far as him being able to compete with the taller, younger, faster and much more powerful Wilder. I think Thompson would be way out of his class if he fought Wilder right now, and I think the beating he would receive would be worse than the one that Duhaupas recently took in losing to Wilder last month by an 11th round knockout. I don’t think Thompson has the same punch resistance as Duhaupas, and that would lead to him getting knocked out quickly by Wilder.

I think it’s safe to say that Thompson will never face Wladimir again. He had two chances already and that’s it. He’s not going to get yet another chance by the Ukrainian. The only way Thompson gets another fight against Wladimir is if he works his way to the No.1 spot with one of the sanctioning bodies, and if Wladimir is able to hold onto his titles long enough to see Thompson accomplish that.

Roy Jones Jr’s fight against Maccarinelli will be his last »