Pacquiao: I want a rematch with Mayweather! 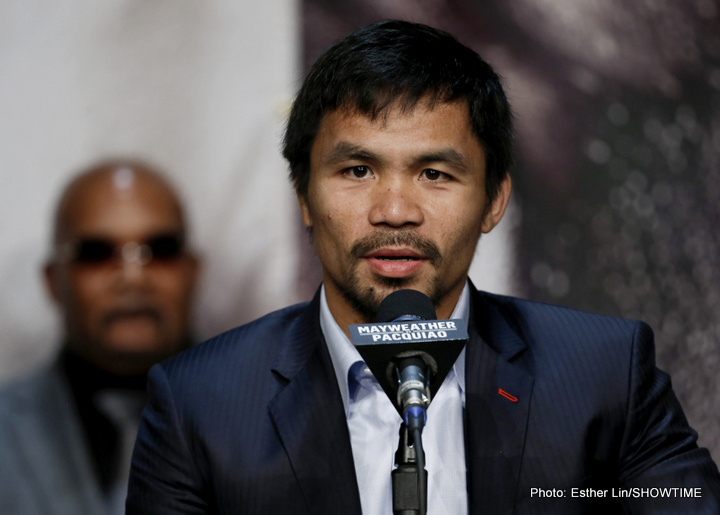 By Allan Fox: Manny Pacquiao (57-6-2, 38 KOs) says he wants a rematch with Floyd Mayweather Jr. (48-0, 26 KOs) now that he’s learned that Mayweather used an IV drip to rehydrate the night before their fight on May 2nd. Pacquiao thinks Mayweather should possibly be punished by the Nevada State Athletic Commission if found guilty of violating WADA’s anti-doping rules.

Pacquiao is unhappy because he feels that Mayweather got an unfair advantage over him for their fight on May 2nd with him rehydrating with the help of an IV drip the night before the fight on May 1st.

Mayweather says he did nothing wrong in using the IV drip infusion to add vitamins and minerals to his body the night before the fight. He says the United States Anti-Doping Agency (USADA) was informed about the infusion.

The USADA says they informed the Nevada State Athletic Commission about Mayweather’s IV infusion, albeit after the fact rather than before. The Nevada Commission was informed about it a little less than three weeks afterwards. This is something that Pacquiao, his promoter Bob Arum and adviser Michael Koncz are not happy about.

Mayweather and the United States Anti-Doping Agency (USADA) have both insisted the boxer’s actions were legal after it emerged he was injected with vitamins and minerals before the fight.

“Are they hiding something? For the sake of fairness and for the good of the sport, NSAC must be consistent,” Pacquiao said via AFP.

Pacquiao said the Nevada Commission must “impose the appropriate sanction.”

With this much time having gone by since their fight last May, it’s unclear what sanctions the Nevada Commission can hand down to Mayweather. If they suspend him for six months or longer, it probably won’t hurt him because he’s talking about retiring after his fight against Andre Berto this Saturday night. Even if he did continue his career, a sixth month suspension would be a slap on the hands, because Mayweather wouldn’t be back in the ring until next May anyway, which is 8 months away.

“I want a rematch,” Pacquiao said. “One without any injury and with fair play. No favoritism. Not one where the Mayweather camp gets to dictate all the terms and conditions.”

Pacquiao agreed to a 60-40 purse split for their fight in May. If they were to fight each other a second time, you would have to believe that Mayweather would be pushing for a lower purse split for Pacquiao, because he beat him by a 12 round decision.

Mayweather has said that he’s not going to give Pacquiao a rematch because he sees him as a poor loser because he didn’t admit that he was beaten afterwards, and because he brought up a shoulder injury that he came into the fight with. For Mayweather to change his mind, it might require a lot of pressure from the boxing public.

Mayweather is saying that he didn’t do anything illegal in using the IV infusion the night before the fight. If Mayweather feels he was in the right in rehydrating with the help of an IV drip before the fight, then it’s going to be difficult for him to be talked into giving Pacquiao a rematch.

“If needed, the NSAC should impose the appropriate sanction to sustain its credibility and to show the world they did not give preferential treatment to the Mayweather camp,” Pacquiao said.

« Berto: I have the speed to keep up with Mayweather

Badou Jack: Groves got famous for getting knocked out by Froch »