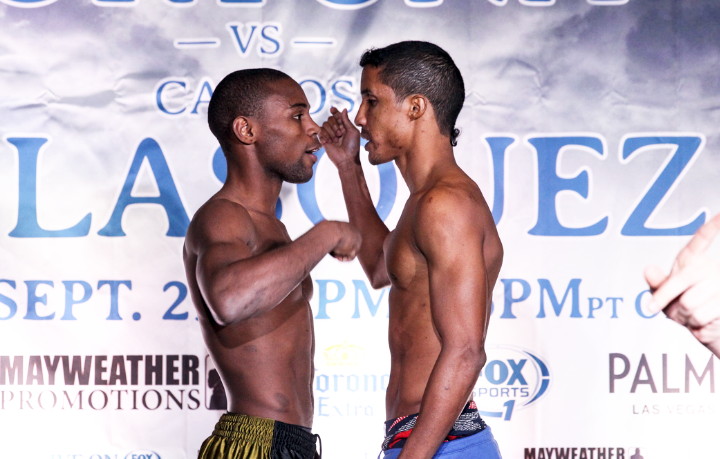 (Photo credit: Lucas Noonan/Premier Boxing Champions) By Dan Ambrose: IF World super featherweight champion Javier Fortuna (28-0-1, 20 KOs) will be putting his unbeaten record and IBF 130lb title up for grabs against the much taller 5’9” Carlos Ivan Velasquez (19-1, 12 KOs) in a voluntary defense on Premier Boxing Champions on Fox Sports 1 from the Palms Casino and Resort at the Pearl Theater in Las Vegas, Nevada.

The 5’5” Fortuna recently captured the vacant WBA 130lb title last May in beating an over-matched Bryan Vasquez by a 12 round unanimous decision in New York at the Barclays Center in Brooklyn. The Fortuna-Vasquez fight was supposed to have been a competitive affair, but Vasquez was too slow of hand and foot to do much against the much faster 26-year-old Fortuna.

Now it’s the 31-year-old Velasquez’s chance to try and do something against the speedy fast Fortuna. Judging by Velasquez’s performance against Rico Ramos two years ago, it’s going to be a mismatch tonight. #8 WBA Velasquez looked really poor in getting stopped by Ramos in the 10th round in September 2013.

Ramos dropped Velasquez in the 10th round to get to the stoppage. Velasquez’s other wins in his eight year pro career have largely come against very weak journeyman level opposition. Velasquez has pretty much sailed through the first eight years of his career facing very weak opposition.

It would be nice to see Fortuna face better opposition than Velasquez because this is just too easy for him. PBC would be better off matching Fortuna against the likes of Sergio Thompson, Rances Barthelemy, Francisco Vargas, Diego Magdaleno, Argenis Mendez, Edgar Puerta, Juan Carlos Burgos, Orlando Saldido, Arash Usmanee, or Stephen Smith. At least those guys could tell the boxing fans about how good Fortuna is.

Tonight’s match-making is way too soft to give us any indication about whether Fortuna has the goods to be a really good fighter. We do know that Fortuna doesn’t like pressure fighters. Luis Franco gave Fortuna all kinds of problems in their fight in August 2013. Fortuna was held to a 10 round draw in a fight that many boxing fans had Franco winning. Since that fight, Fortuna has been matched up against pretty limited opposition. There wasn’t a rematch against Franco, which kind of tells you that there’s some confidence issues with Fortuna and his management about whether he would be able to beat Franco in a rematch.

The best fighter that Fortuna has faced in the last two years was Vasquez, and he obviously wasn’t very good. Velasquez isn’t a pressure fighter, so that will make it really easy for Fortuna to win the fight tonight.

Also on tonight’s card are the following fights: