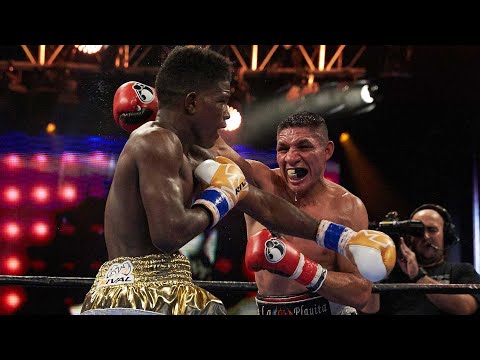 By Jim Dower: Unbeaten 147lb prospect Jamal James (18-0, 9 KOs) kept his record perfect in defeating Juan Carlos Abreu (18-2, 17 KOs) by a mostly one-sided 10 round unanimous decision on Premier Boxing Champions on Bounce on Friday night at the Full Sail Live at Full Sail University in Winter. The final judges’ scores were 97-91, 96-92 and 96-92. Abreu surprisingly knocked James down in the 4th round.

In the 6th, James came back and was able to put Abreu down on the canvas. From that point on, James dominated the fight.

Overall, James looked decent for a prospect, but he’s got to make a lot of improvement in the future if he wants to become a major player in the welterweight division. His lack of punching power could be a hindrance for him getting to the top.

There are bigger punchers than him in the division, and also guys with better hand speed. Right now he looks like someone would come become a good contender/gate keeper type fighter. He might want to move down to 140 where his lack of power won’t hurt his career as much.

“He caught me with a right in the fourth that dropped me, but I didn’t feel too buzzed,” James said after the fight. “Hopefully a win like this pushes me even further. I wanted to show my skills, but he was a formidable fighter. This was a great step-up fight for me to show people I’m not just a paper fighter.

Undefeated 19-year-old junior middleweight prospect Erickson Lubin (12-0, 9 KOs) stopped 34-year-old Orlando Lora (31-6-3, 19 KOs) in the 6th round of a scheduled 10 round contest. The fight was halted after the 5’11” Lubin hurt Lora with a big right hand, and then flurried on him until the referee Frank Santore Jr. stepped in and stopped the bout at 1:58 of the round with Lora still on his feet but badly hurt.

Lubin knocked Lora into the ropes in the 2nd round after nailing him with a hard right hand. It was scored a knockdown because of the ropes holding Lora up. In the 3rd round, Lubin had Lora’s face badly redden from a series of hard left and right hands to the head. Lubin connected with some powerful uppercuts in the 4th round that snapped Lora’s head back again and again. It was surprising that Lora was able to remain on his feet because he was getting hit with some really big shots.

“I kept telling myself that if (Lora) throws two punches then I’m going to throw four,” Lubin said. “If he threw four, I’d throw eight. I wanted to double his effort and show that I have more will than him. I didn’t want this fight to go this distance. My corner helped me all fight. Every time I went to my corner they were helping me make the right adjustments.”

Lubin is a decorated former amateur star. He’s got the talent to be one of the best junior middleweights in the division someday. He would be better if he could fight t 147 though because his talent would stand out a lot more in that weight class than at junior middleweight.

In the 154lb division, there are other fighters in the division like Jermall Charlo and Julian Williams have a great deal of talent and those would be tough fights for the flat-footed Lubin. He might not have the foot movement to beat those guys. But at 147, Lubin would be a major player immediately. However, at 19, it’s not likely that he could stay in that weight class at all if he keeps growing and filling out.

Lora has been stopped in the past by Julian Williams by a 3rd round knockout in 2013, in the 5th round by Jermall Charlo in 2013 and in the 6th round by Keith Thurman in 2012.

Junior middleweight “Wilky Campfort (21-1, 12 KOs) stopped Ronaldo Montes (16-3, 14 KOs) in the 3rd round. Campfort was knocked down in the 1st round. In the 2nd round, Campfort knocked Montes down several times.