The 26-year-old Fortuna flurried on a tired and hurt Velasquez in the 10th round until referee Russell Mora stepped in and halted the mismatch at 0:35 of the round.

Fortuna, 5’5″, knocked the tall 5’9″ Velasquez down in the 2nd round after nailing him with two rabbit punches to the back of the head. Fortuna tried to finish Velasquez off but there wasn’t enough time in the round to finish him off.

Velasquez suffered a bloody nose in the 1st round. His nose continued to bleed for the remainder of the fight.

Fortuna’s odd fighting rhythm gave Velasquez all kinds of problems. Velasquez seemed to be afraid to throw his punches because he was never able to predict what hand Fortuna would counter him with. Instead of attacking Fortuna with combinations the way he needed to in order to have a chance of winning, Velasquez focused on throwing one or two punches at a time. It wasn’t enough to give Fortuna problems.

Velasquez’s lack of punching power made it easy for Fortuna to throw his fast flurries without having to worry about getting nailed with something big in return. Fortuna struggled with the punching power of Cuban Luis Franco in their fight in 2013, and he was held to a 10 round draw in that fight. If Velasquez had Franco’s punching power and fighting style, Fortuna would have been in trouble tonight.

Fortuna did a lot of holding in rounds 4 through 12. He didn’t want to have to deal with Velasquez’s attacks, so he held him to shut him down each time he would come in close.

“I went ahead and looked back [at his corner] as I was hurting him because I wanted them to understand that I could go the full 12 rounds and that I wouldn’t stop until the final bell rings,” Fortuna said via espn.com.

All in all, Fortuna looked good in winning the fight. He won the fight based on the match-making done for him by his adviser. Fortuna will do good as long as he’s matched carefully, but once he gets put in there with someone with Franco’s punching power and fighting style, he’s going to have problems.

“The head butt, I think broke my nose early in the fight, and it effected my breathing throughout the bout,” Velasquez said. “I take nothing away from Fortuna, he’s a great fighter. I left everything in the ring and I never quit. I wanted to give it my all and that’s what I did.”

Fortuna is good against a certain type of fighters. If this had been a solid super featherweight like Orlando Salido, I think Fortuna would have taken a terrible beating and been knocked out. Salido is a far better fighter than Fortuna could ever hope to be. Those two fighters are different levels. Fortuna is a paper champion at this point, and he doesn’t hold a candle to the talent that Salido has going for him.

“I was just waiting to counter punch Velasquez. The rhythm of the fight was important. I was in control of the fight because I could control the rhythm,” Fortuna said.

Molina, 25, staggered Dolton with a big left hook in the 4th round. However, Dolton was able to quickly regain his composure and fight well in the 5th though 7th rounds. Molina appeared to dominate the 8th and 9th rounds with his heavy hooks to the head and body. Both fighters stood toe-to-toe in the 10th round and landed bombs. Dolton did the better work in that round.

Molina would have likely won the fight if he’d let his hands go more. He was throwing too many single shots, and not throwing enough combinations. Molina fought like he was facing a KO artist instead of a light puncher in Dolton.

Molina has a lot of work to do in his game if he wants to compete against the best fighters in the 154lb division like Jermall Charlo, Erislandy Lara, Jermell Charlo, Vanes Martirosyan, Erislandy Lara, John Thompson, Austin Trout and Julian Williams. Those fighters would have given Molina all kinds of problems with their punching power if they were in the ring tonight with him.

“I let it get too close, so I can’t complain about the decision,” Molina said. “I’ll go home and watch the fight but right now I can’t complain. The judges saw what they saw. The game plan was to stay relaxed, but I fell out of the game plan. I hurt him in the third round and it kind of messed me up. I started looking for that one shot to end it. I have to work on staying steady and relaxed.” 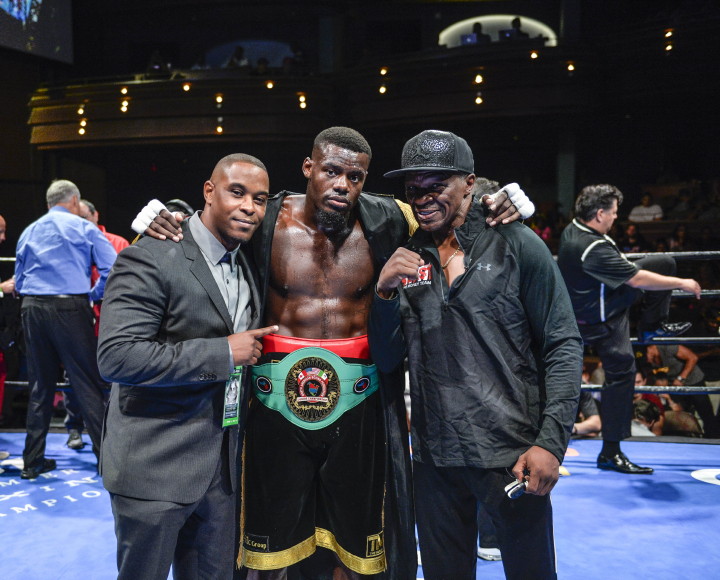 Unbeaten cruiserweight prospect Andrew Tabiti (12-0, 11 KOs) defeated an over-matched 26-year-old Hungarian Tamas Lodi (16-6, 13 KOs) by a 2nd round knockout. Tabiti, 26, knocked Lodi down with a big right hand near the end of the 2nd round. In between rounds the fight was halted by Lodi’s corner. The official time of the stoppage was 3:00 of the 2nd round by referee Jay Nady.

Tabiti is one of Floyd Mayweather Jr’s fighters. He’s got the same fighting style as Mayweather, but he lacks the hand speed and he’s really not a big puncher like some of the stronger cruiserweights in the division. It’s going to be extremely difficult for Tabiti to compete with the better cruiserweights in the division like Marco Huck, Ilunga Makabu, Krzystof Glowaki, Dmitry Kudryashov, Rakhim Chakhkiev, Krzystof Wlodarczyk, Thabiso Mchunu, Oleksandr Usyk, Grigory Drozd and Victor Ramirez. At this point, I think even 46-year-old Roy Jones Jr. would beat Tabiti. We’re talking about a very raw fighter in Tabiti.

« Viloria: Roman Gonzalez hasn’t fought anyone with my power