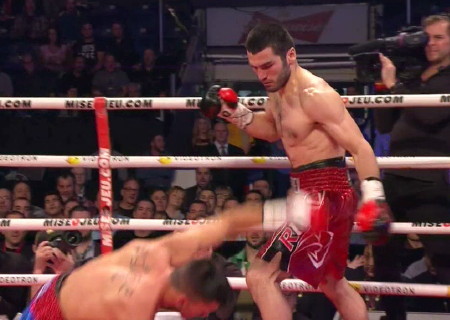 By Jim Dower: Undefeated No.9 IBF Sullivan Barrera (16-0, 11 KOs) has agreed to face undefeated no.2 IBF Artur Beterbiev (9-0, 9 KOs) in an IBF light heavyweight eliminator bout. The negotiations will start soon between Barrera’s promoter Kathy Duva and the promoter of Beterbiev for a fight this year.

There’s obviously more money in it for Beterbiev if he can beat Barrera to become the IBF mandatory challenger.

Barrera, 33, comes from Cuba and has good punching power, but he’s not that fast of hand and foot, and he’s kind of stiff and rigid with his fighting style. That’s going to make it very hard for him to be able to handle the punching power of Beterbiev.

There were a number of light heavyweight contenders who turned down the fight with Beterbiev; the last one being Jean Pascal. It’s too bad that Beterbiev couldn’t get the fight against Pascal because it would have made for an interesting fight to see how he woul do against him compared to how Kovalev did in his recent 8th round knockout win.

It’s still going to be a really tough fight for Chilemba, because he’s not much of a puncher, and he’s known more for hi defensive ability and his fast hands. He’s going to need to be able to get his shots off if he wants to beat Alvarez because he’s got a good offense and excellent punching power.

The winner of the Chilemba vs. Alvarez fight will become the No.1 WBC mandatory challenger to WBC light heavyweight champion Adonis Stevenson. That’s going to be really tough for Alvarez or Chilemba. Neither of these guys has the kind of punching power, chin or defense to compete with a guy as good as Stevenson. To have a chance at beating Stevenson, you have to possess some punching power and/or hand speed. Alvarez and Chilemba don’t have enough of those qualities to get the better of someone like Stevenson.