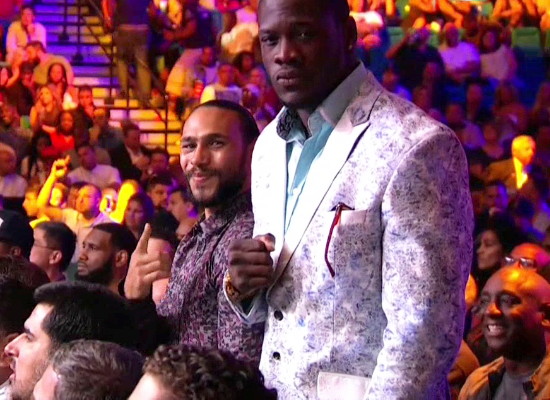 By Scott Gilfoid: #12 WBC Johann Duhaupas (32-2, 20 KOs) is the latest of the possible opponents for WBC heavyweight champion Deontay Wilder (34-0, 33 KOs) to fight in his next bout on September 26th on Premier Boxing Champions on NBC.

Andrzej Wawrzyk is also still under consideration for Wilder’s next fight. What both of these talented heavyweights have in common are good size, mobility and talent. Duhaupas is 6’5”, has a great chin, and can move around the ring.

If Wilder is to KO this guy, he’s going to have to cut off the ring on him and really go after him because he’s not going to get him out of there by landing only an occasional shot to the head.

“Under consideration to face @BronzeBomber on 9/26 on NBC in prime time: Johann Duhaupas. He’s the former French heavyweight champeeen!!!!!” Dan Rafael said on his Twitter.

The difference was Teper had the better power and that enabled him to cruise to a fairly comfortable decision. But having seen this fight myself, I was really impressed with the boxing skills Duhaupas showed in that fight. He looked very good and gave Teper his hardest fight of his career.

Last March, Duhaupas beat former world title challenger Manuel Teper by a 10 round decision. The fight was scored close, but I had Duhaupas winning by a lopsided decision. He was simply too good for Charr and he deserved the win.

Duhaupas was beaten by Francesco Pianeta by a unanimous decision seven years ago when he was far less developed than he is now. Believe me, if Duhaupas fought Pianeta now, he’d beat him with ease because he’s a much better fighter now than he was back then.

IBF featherweight champion Lee Selby has reportedly inked a deal with the high powered American adviser Al Haymon to guide his career as an adviser. It’s a curious move by Selby, because he already has a manager in Chris Sanigar and a very influential promoter in Eddie Hearn of Matchroom Sport. I’m not really sure what Haymon can do for Selby that’s not already being done already for him by Sanigar and Hearn.

Selby has already made it clear that he just wants to milk his IBF title for a few years and not go after any of the other world champions at featherweight for a unification fight. That means we’re not going to see Selby fight the likes of Gary Russell Jr. or Vasyl Lomachenko. Further, we probably won’t see Selby defending his title against talents like Nicholas Walters or Guillermo Rigondeaux.

All the interesting fights that are out there for Selby, he doesn’t want right now because he just wants to defend his IBF title against the challengers the IBF has ranked in their top 15. As such, I really don’t know what Haymon can do for Selby other than having some of his title defenses televised on Premier Boxing Champions in America. I mean, it would be great if Selby were willing to face the talented other champions at 126, but that’s not the case.

At best, we’ll be seeing Selby defend his title against the IBF’s top 15 contenders, which for the most part aren’t very good fighters. The guys that are good are fighters like Abner Mares, Leo Santa Cruz and Jayson Velez. The question is will Selby fight any of them? I have my doubts.

“I’m delighted to have signed with Al Haymon and I’m looking forward to boxing in some massive fights ahead,” Selby said via Fight News.” I’m also pleased to continue with Chris Sanigar, who’s been with me since the start of my pro career. It’s exciting times ahead and I can’t wait for my first world title defense.”

If this new signing with Haymon results in Selby facing the likes of Mares, Velez and Santa Cruz, then I’m all for it and see it as a good thing. But if all we’re going to see is Selby facing obscure contenders for him to easily milk his IBF title, then I don’t see it can help Selby being with a talented adviser like Haymon.

“Lee has been based out in the USA for his last five training camps and it was always our ambition longer term for Lee to box in the USA as well as at home in the UK,” Sanigar said.

« Khan says he’s disappointed in getting passed over by Mayweather