Deontay Wilder vs. Johann Duhaupas in the works for September 26th in Birmingham, Alabama 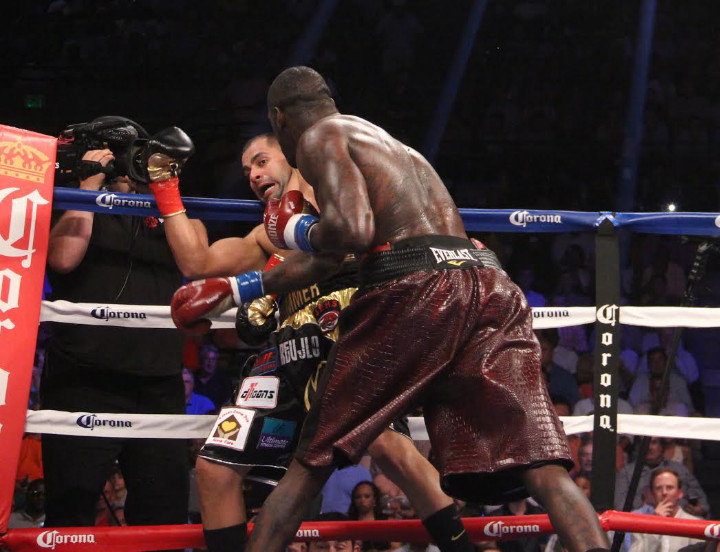 (Photo credit: Sumio Yamada) By Scott Gilfoid: Negotiations are reportedly underway or a fight between WBC heavyweight champion Deontay Wilder (34-0, 33 KOs) and #12 WBC Johann Duhaupas (32-2, 20 KOs) for a fight on Premier Boxing Champions on NBC in Birmingham, Alabama. The deal is expected to be finalized and the fight to be announced within the next few days.

The 6’5” Duhaupas, 34, is a talented heavyweight who comes from France, and who has excellent boxing skills. Duhaupas has a good jab, and is very good at moving around the ring. Duhaupas will give Wilder some good rounds to get him ready for his title defense in early 2016 against his No.1 WBC challenger Alexander Povetkin.

The negotiations for the Wilder-Povetkin fight will be starting in October.

In Duhaupas’s last fight, he defeated former world title challenger Manuel Charr by a 10 round majority decision last April in Moscow, Russia. While the judges had the fight scored closely, I saw Duhaupas winning 8 rounds to 2 for Charr. It was a pretty one-sided fight from my perspective, and I don’t understand what the judges were looking at when they scored the fight. Charr wasn’t landing anything in the fight and was just eating shots.

Last March, Duhaupas lost a 12 round decision to the hard hitting Erkan Teper. The scoring for that fight was fair and I agreed with it. Teper had too much punching power and this enabled him to win most of the rounds based on his leaner landing shots. But Duhaupas still gave Teper a lot of problems with his jab, combinations and movement.

The 6’7” Wilder’s last fight was in Birmingham against fringe contender Eric Molina. Wilder knocked Molina out in the 9th round in front of 9,347 fans. With a crowd like that in attendance, it makes sense for Wilder to come back to Birmingham for his next fight. If Wilder were to fight in Las Vegas, he would likely bring in only a fraction of that number of fans. I mean, Wilder can sellout the arenas in Birmingham, and likely elsewhere in Alabama. It makes all the sense in the world for Wilder to continue to fight in Alabama his entire career. The only time that Wilder should go away from his home state is when one of his opponents has more cache than him like Wladimir Klitschko.

I rate Duhaupas above Wilder’s last opponent Eric Molina. Duhaupas doesn’t have Molina’s punching power, but he is so much better than Molina in terms of boxing skills, mobility and overall talent, I just see Duhaupas as a far better overall fighter. Wilder is going to need to bring his A-game if he wants to get out of the Duhaupas with his WBC title still in his possession because he could lose his strap if he doesn’t take Duhaupas out of there. I think Duhaupas might even beat Povetkin. He’s certainly got the skills to do a job on him, and he definitely has the size.

Khan: I’ve done everything Floyd asked me to »