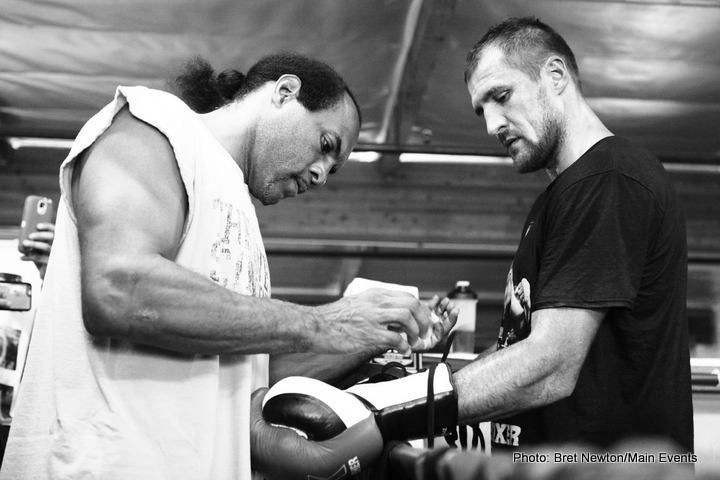 By Allan Fox: IBF/WBA/WBO light heavyweight champion Sergey Kovalev (27-0-1, 24 KOs) will be defending his titles this Saturday night on July 25th against #1 IBF Nadjib Mohammedi (37-3, 23 KOs) on HBO Championship Boxing from the Mandalay Bay Resort & Casino, in Las Vegas, Nevada. Kovalev will be looking to get this fight over with as fast as possible to show that Mohammedi doesn’t belong in the same ring with him.

Mohammedi, 30, has one of the better records that Kovalev has faced during his career, but there’s really very little substance to his resume. Most of Mohammedi’s wins have come against poor opposition with limited talent.

When Mohammedi did step up a level four years ago in his fight against Nathan Cleverly, he was beaten easily by a 12 round decision.

Mohammedi has won 13 straight fights since the loss to Cleverly, but the opposition has been woeful. It’s been nothing but easy fights against a combination of journeyman, inexperienced fighters, and guys with just no talent to begin with.

Kovalev’s promoter Kathy Duva is looking to match him against WBA super middleweight champion Andre Ward next year at some point. It would be a fight at 175 if they can negotiate it. That would be Kovalev’s best chance of a big fight in 2016. Getting the other top light heavyweights like Juergen Braehmer and Adonis Stevenson could ultimately prove to be an impossible task. There’s no interest from either of those fighters in facing Kovalev, and that’s not expected to change in the near future.

Kovalev has knocked out 10 out of his last 11 opponents dating back to 2011. During that time, he’s beaten Pascal, Bernard Hopkins and Cleverly, knocking out two out of those three opponents. If Kovalev can add Ward’s name to his KO record, it would be an impressive accomplishment because many boxing fans see Ward as unbeatable.

Scoring a knockout over Ward would likely increase Kovalev’s popularity I a huge way, because it would give him an opponent record and a lot of respect in the boxing community. Kovalev’s wins over Hopkins and Pascal weren’t that big of a deal because both guys had been beaten before.

Kovalev’s victory over Cleverly was impressive because he was unbeaten at the time when Kovalev destroyed him in the 4th round in their fight in 2013, and there were some boxing fans who thought Cleverly would beat him.

« Hearn in talks for Rigondeaux vs. Quigg fight in 2015