Mosley: If Mayweather doesn’t want to fight Amir Khan, then I will 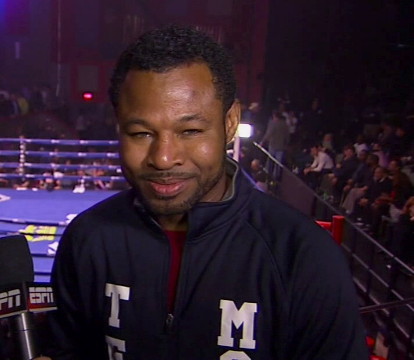 Mosley says if Floyd Mayweather Jr. won’t take the fight with Khan, then he’ll face him and break Khan’s jaw. Mosley specifically says he wants to fight Khan, Tim Bradley, Mayweather Jr., Kell Brook and Oscar De La Hoya. He said that he wanted to spar with Brook, but his promoter Eddie Hearn wouldn’t let him.

“If Mayweather don’t want to take on @AmirKingKhan then Mosley will. Any1 who wants these hands can get it,” Mosley said on his Twitter. “Everyone knows I would shatter Khan’s jaw.”

Khan’s reply to Mosley’s tweet was this: “Ha ha.”

Khan pretty much talked himself out of a fight against Mayweather, according to Lance Pugmire. It’s not that Mayweather wouldn’t have fought him because I believe he would have. It’s just that Khan was whining for so long about a fight against him that it finally seems to have gotten on Mayweather’s last nerve. Now Khan has nothing to show for his five years of trying to talk up a fight between him and Mayweather.

I honestly wouldn’t be surprised in the least if Khan were to face Mosley. I mean, look at the guys that Khan has been facing in the last three years: Carlos Molina, Julio Diaz, Chris Algieri, Luis Collazo and Devon Alexander.

Mosley fits right in with the guys that Khan has been facing in the last three years. Instead of Khan fighting guys that are doing well and in their prime, he’s been fighting fighters on the downsides of their careers. Collazo and Diaz were names from the past, Neither guy has done anything with their careers in many years. Molina is an ex-lightweight and has never done anything other than being an opponent for guys like Khan and Adrien Broner. Algieri was coming off of an embarrassing one-sided 12 round decision loss to Manny Pacquiao when he fought Khan.

“I will fight anyone but Broner,” Mosley said. “I don’t want to be responsible for that kid’s death. You saw what Porter did.”

When asked who he wants to fight, Mosley said “It would have to be Mayweather, Bradley, Khan.”

Mosley really wants a second fight against Mayweather because he feels he can beat him this time around. Mayweather easily beat Mosley five years ago in defeating him by a one-sided 12 round unanimous decision.

“I can beat him [Mayweather] this time or die trying,” Mosley said. “I’m too good right now.“

When asked if he’s going to be attending Mayweather’s September 12th fight against Andre Berto in Las Vegas, Nevada, Mosley said “Hell no. No one wants to see that. No one enjoyed his last fight against Pacquiao. We’re definitely getting no action with Berto.”

If Mosley would put some victories together over some of the top welterweights in the division, then maybe he could get one of the top names to fight him, but he’s been losing for so long that he’s been kind of forgotten by fans in the last few years.

« Luke Campbell Wants To Get The Job Done Versus Coyle