Mayweather Only Has Two Options: Bradley or Pacquiao 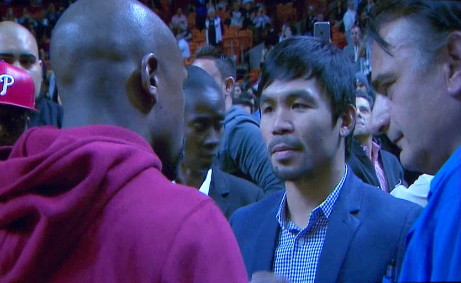 By Rick Jones III: I strongly believe this is the end of the road for Floyd Mayweather Jr. I have been hearing rumor after rumor that his next opponent is Andre Berto and then I hear that it is Mayfield and then I hear it is Amir Khan. I think it is Hilarious and pretty damn disrespectful to the boxing fan that this is happening when the only two options for Mr. Money Mayweather are Timothy Bradley and a rematch with Manny Pacquiao.

The funny thing about this whole situation is that Mayweather thinks his work is done in the sport of boxing. I give him the respect on the fact he beat a guy that he was avoiding for years but that’s it.

September 12th is his last fight and Showtime doesn’t expect much since all the backlash from the May vs Manny Pacquiao fight. Showtime is even ready to put the fight on CBS because they know very well that Mayweather’s next fight will not generate any type of numbers. Mayweather at this point does not care about the fans or anybody because he knows he gets paid regardless.

Showtime is going to take a little hit here of $32 -$35 million. which is ok because after the May vs Manny rip off prices they caught up to where they need to be. Which brings me to my main point why Timothy Bradley and Manny Pacquiao are the still the fights people want to see. First off Bradley is a fighter that fights the same style like Mayweather utilizing skill and speed.

Bradley is a proven warrior that can walk through any punch which everyone saw in the Jesse Vargas fight and others before. I need an explanation from Mayweather why Berto deserves the fight over him and I hope we get it soon. Now as for Manny Pacquiao I feel like he didn’t fight the way he wanted to fight. I understand there was a bum shoulder involved but that doesn’t take way from the fact that he got out boxed and out classed in everyway. The people don’t see it that way and a lot of people are believing this non-sense if the shoulder was heal it would be a different fight. Ok well that is the only reason why people want the rematch.

At the end of the day Timothy Bradley deserves the next fight against Mayweather. He is the only boxer I would pay to see fight Mayweather and possibly beat him.