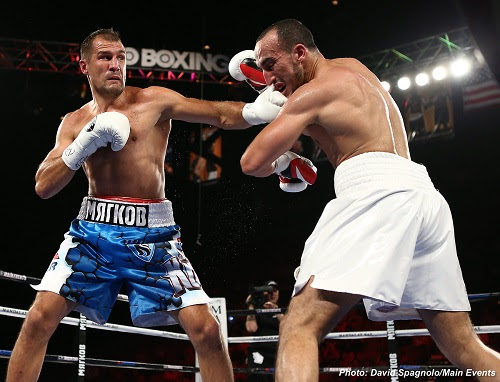 Kovalev knocked Mohammedi down twice in the fight in dropping him in the 2nd and 3rd rounds. Kovalev finished Mohammedi off with a big right hand followed by a left to the head that sent him down. Mohammedi clutched at his left eye while he was on the canvas, and failed to beat the canvas.

“I’m ready for anyone,” Kovalev said after the fight. “If the promoters want to make this fight [against Andre Ward], I’d be happy.”

HBO’s Max Kellerman even asked Kovalev if he’d be interested in facing Yunieski Gonzalez, who lost a controversial 10 round decision to Jean Pascal tonight in the co-feature, and Kovalev repeated that he’s ready for anyone if the people want to see the fight and if his promoters want to make the fight.

In the second half of the fight, Pascal was able to take control over the action in landing the harder shots against a slightly fading Gonzalez. Pascal was still outworked though by Gonzalez. Pascal gave away the 9th round through inactivity. However, in the 10th round, Pascal landed some big shots that had Gonzalez backing off.

Despite losing the fight, Gonzalez clearly won a lot of fans with his performance. He was cheered after the fight while Pascal was mostly booed by the fans. Gonzalez has a lot of talent, and he’s very powerful. He looks good enough to beat most of the light heavyweights in the division. A fight between Gonzalez and Kovalev, or Gonzalez vs. Artur Beterbiev or Adonis Stevenson would be very exciting. Gonzalez’s chin and his punching power would give him a chance to beat the likes of Stevenson. If he could take Stevenson’s power, he’d give him a lot of problems due to his power and high work rate. It would be difficult for anyone to try and beat Gonzalez because he never stops throwing punches.

Gonzalez did himself proud tonight, and the HBO analysts seemed to really like what they saw from him. With this performance tonight, it’s likely we’ll see Gonzalez back on HBO before long.

With the victory, Pascal is now in position to get a rematch against IBF/WBA/WBO light heavyweight champion Sergey Kovalev if he wins his fight tonight against No.1 IBF Nadjib Mohammedi in the main event. Pascal was stopped in the 8th round by Kovalev last March at the Bell Centre in Montreal, Canada.

« Kovalev vs. Mohammedi tonight on HBO