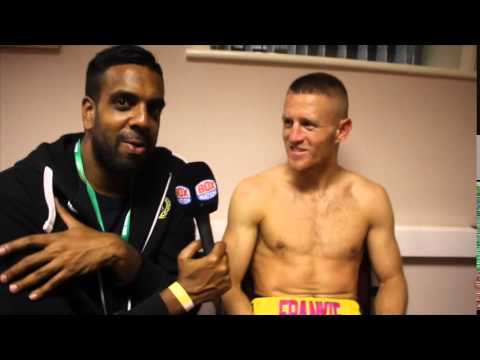 By Scott Gilfoid: In a fight that was marred by a shoulder injury previously unbeaten Jose Zepeda (23-1, 20 KOs) suffered in the 2nd round of tonight’s contest, #1 WBO Terry Flanagan (28-0, 10 KOs) won by a 2nd round technical knockout on Saturday night to capture the vacant WBO lightweight title at the Velodrome, in Manchester, United Kingdom.

I don’t know how you can call it a victory for Flanagan, as Zepeda hurt his left shoulder while throwing a punch in the 2nd round when his arm got caught up on the arm of Flanagan, causing his shoulder to become dislocated. At the end of the 2nd, Zepeda’s corner attempted to put his arm back into the socket, but it was to no avail.

So instead of calling the fight a no contest, which would have been fitting, they gave Flanagan the win. I thought it was pretty bogus. Zepeda looked like he wasn’t too happy to lose without even being punched on his shoulder. You got to feel sorry for Zepeda because he was controlling the action in the first two rounds up until hurting his shoulder in the 2nd.

There’s no word yet about a rematch. It would certainly be something that would be fitting for the fight due to the highly controversial ending of the fight. We’re not sure yet how long it’s going to take Zepeda to heal up from the injury. If it needs surgery, then it’s going to take a while for him to come back from it.

One thing I noticed about Flanagan was how huge the guy looked compared to Zepeda. I mean, Flanagan looked like a junior middleweight in there compared to Zepeda. I would have liked to have put Flanagan on a scale before the fight to see how heavy the guy was because he looked at least 10, possibly 15 pounds heavier than Zepeda. A good rehydration limit would have something that Zepeda’s management should have pushed for the fight in order to keep Flanagan from getting so huge after the weigh-in.

6’7”, 283lb heavyweight Alexander Ustinov (31-1, 22 KOs) destroyed 36-year-old journeyman Travis Walker (39-14-1, 31 KOs) by a 2nd round knockout. Ustinov put Walker down on the canvas twice in the opening round with heavy shots to the head. In the 2nd round, Ustinov hurt Walker with a chopping right hand to the head that led to the fight being stopped. Walker was defenseless at the time of the stoppage.

« Broner is holding himself back intentionally, says Atlas