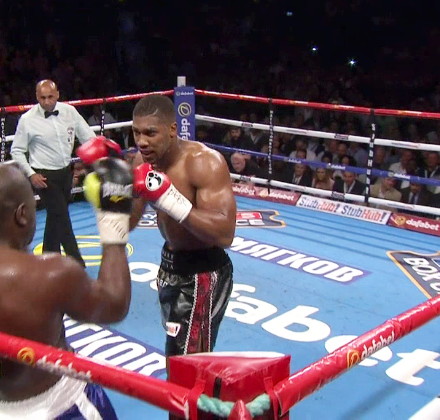 By Scott Gilfoid: Boxing fans were hoping to see undefeated heavyweight contender/prospect Anthony Joshua (13-0, 13 KOs) face a good opponent for his next fight to see how well he does against someone with an actual pulse rate, but it doesn’t look like that’s going to happen for Joshua’s next fight on September 12th.

It looks like Joshua’s next opponent will be Scotland’s Gary Cornish (21-0, 12 KOs) on September 12th at the O2 Arena in London, England. Cornish is about the equivalent of Kevin Johnson, possibly a step below him in terms of talent.

About the best you can hope for is Cornish throwing some punches before going down for the count. Joshua is using the 6’7” Cornish to get ready for a far more dangerous fight against Dillian Whyte later in the year, as long as Joshua beats Cornish and doesn’t suffer any kind of injuries in the fight.

We’d already see Joshua injured twice during his career with shoulder and back problems, which obviously isn’t a good sign for someone as young as the 25-year-old Joshua. If he’s suffering injuries like this at his age, what’s going to happen when he hits the 30s and starts aging a little.

“Gary Cornish is a very good opponent. We went up to Scotland once before and the atmosphere was unbelievable. He’s a big strong guy and is someone I’d like to box,” Joshua said to the Dailymail.co.uk. “The initial opponent we were trying to get organized was Dillian. He’s someone who’s beaten me as an amateur and been vocal about fighting me.”

Joshua seems to think that Cornish will get him ready for Whyte fight. I don’t know about you, but I don’t see anything similar with those guys. Whyte is like a tiger, and never stops coming forward for an instant. His left hooks is incredible and his right hand is almost as good. That’s why he had Joshua on the canvas in their fight in 2009. Had that been a 12 round bout instead of just a four rounder, I think Whyte would have knocked Joshua out. It was pretty clear that Joshua couldn’t handle Whyte’s punching power. At 27, Whyte is arguably even stronger than he was before. He’s not weighing in the 250s like Joshua, but he’s a lot more mobile and with his hands.

“Dillian is another stepping stone. I’ve higher ambitions than beating someone who is 14-0. The only issue I have is that he should stop talking about me and focus on his own career,” Joshua said.

I see the Joshua-Whyte fight as a toss-up that could go either way. I would say Whyte all the way, but he’s missed some time in his career due to suspension.

Whyte is going to be right on Joshua from the opening bell, looking to take his head off with every punch. Joshua is one of those slow deliberate type of fighters who needs his opponent to not let his hands go and back up against the ropes for him to do really well.

When Joshua faces guys that throw punches like Whyte, Roberto Cammarelle and Erislandy Savon, Joshua struggles badly. Whyte created the blueprint in how to beat Joshua and Cammarelle and Savon followed in the Olympics and were arguably robbed of victories in the minds of a lot of boxing fans at the London Olympics in 2012.

« Golovkin with few options for next fight

Mayweather hasn’t complied with WBO’s rules, will likely be stripped of title on Monday »