Tony Bellew will fight for a world title in October or November, says Hearn 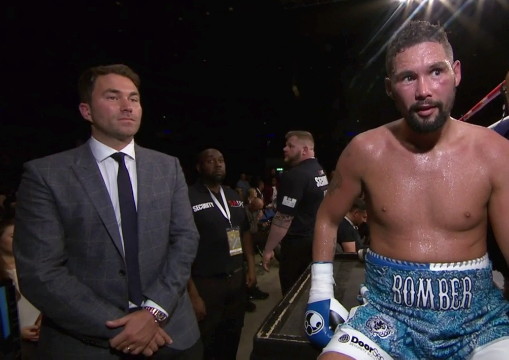 Hearn specifically wants Bellew to fight Hernandez for his IBF title, even though Bellew has a much higher ranked with the World Boxing Organization at No.2. Hearn didn’t come right out and say it, but obviously he sees Hernandez as the most vulnerable of the four cruiserweight champions.

The options for Bellow are tough ones once you get past Hernandez, who has shown to have both a chin and stamina problems during his career. The other champions are Grigory Drozd, Denis Lebedev and Marco Huck. Bellew would likely be knocked out by all three of them. Those are so much better than the fighters that Hearn has been feeding to Bellew since he moved up to cruiserweight last year.

“We want the winner of Hernandez vs. Ramirez for the IBF belt,” Hearn said. “He [Bellew] can fight any of the world champions, but that’s [Hernandez] definitely the route. They fight in July, and then in October or November, Tony has his fight for the world title. He’s done everything else,” Hearn said.

The 6’4” Hernandez is highly skilled, and I can’t see Bellew being able to compete with this guy. Hernandez has a 15-fight winning streak going since he was stopped in the 3rd round by Wayne Braithwaite in 2008. That was the old version of Hernandez. He’s since learned to be a lot more careful in his fights by avoiding going toe-to-toe with his opponents. Hernandez no longer takes chances and he’s very hard to beat.

Last Friday, Bellew stopped Ivica Bacurin (22-8-1, 12 KOs) by a 10th round knockout at the Echo Arena in Liverpool, UK. Bellew knocked Bacurin down three times in the fight. He dropped him with a nothing of a left hook in the 2nd, and then with right hands in the 5th and 9th rounds. This was a typical opponent for Bellew, who has been facing just flat out awful opposition since he moved up to cruiserweight a year ago.

Bacurin looked especially bad. He turned his back on Bellew on two occasions in the fight and started walking towards the ropes like he was in the process of quitting. The first time Bacurin did that, Bellew’s eyes got real big, and he tore after him looking to brain him in the back of the head. Thankfully, Bacurin turned around in time to keep from getting punched from behind by Bellew. It saved the boxing fans at ringside from seeing an ugly sight.

I’m not sure why Hearn keeps matching Bellew against weak opponents. If he wants to get him ready for a world title shot against Yoan Pablo Hernandez, don’t you think he should be putting him in with some opposition that can at least fight? Come on. I don’t know why Hearn isn’t matching Bellew against contenders like this: Olesandr Usyk, Ilunga Makabu, Krzystof Wlodarczyk, Rakhim Chakhkiev, Ola Afolabi, Thabiso Mchunu or Dmitry Kudryashov. Those are the fighters that Bellew needs to be fighting if he wants to get ready for a title fight.

Why is Bellew being matched against guys like Bacurin, Nathan Cleverly, Julio Cesar Dos Santos and Valery Brudov? When you match a fighter like Bellew as softly as Hearn has been matching him, you get a fighter who is hopelessly over-matched when he eventually steps it up to fight for a world title. I recognize that Hernandez is considered the weak link among the four cruiserweight champions, but he’s so much better than the guys that Bellew has been fighting at cruiserweight. Bellew is going to be in shock when he gets in there with Hernandez and realizes how much better he is compared to the stiffs that Hearn has been feeding Bellew.

Bradley: Vargas is puppy chow to me »