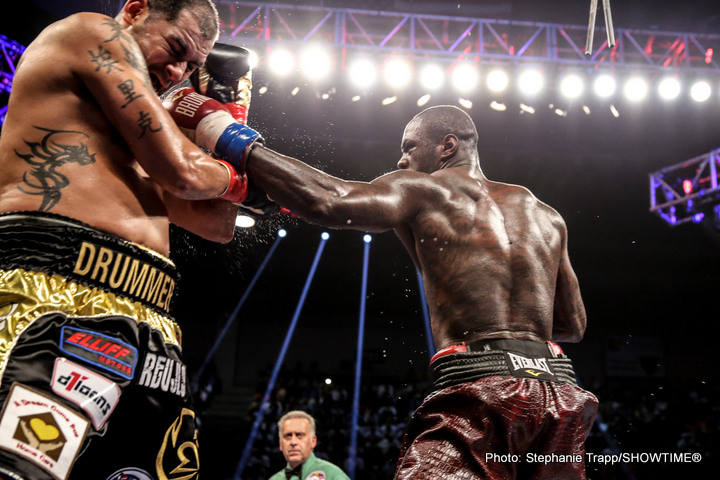 The numbers for Wilder’s fight were far fewer than in his previous bout against former WBC heavyweight champion Bermane Stiverne last January. The Wilder-Stiverne fight brought in 1.24 million viewers on Showtime. Those numbers reflected how competitive the fight was seen. I mean, there were a lot of boxing fans who felt that Wilder was going to lose that fight. He fought really well and surprised fans by easily beating a guy that they thought would beat him.

One reason for that was because boxing fans perceived the Wilder-Molina fight to be a mismatch rather than a competitive. In that respect, they were right, because the Wilder vs. Molina fight was clearly a mismatch for the most part.

Each round saw the 6’7” Wilder stalking Molina around the ring like a lion hunting a lamb. Only occasionally did Molina turn things around and come forward briefly. There was no momentum from Molina, as he would back off each time Wilder would brain him with a hard right hand.

Molina didn’t have the name value for him to be considered worth watching in my view. Unlike Stiverne, Molina hasn’t been on enough televised cards for boxing fans to have been excited about wanting to see him against Wilder.

Another thing that hurt Wilder’s ratings was the undercard for the fight. There weren’t any interesting fights to get excited about on the undercard.

Wilder is obviously capable of bringing in huge ratings for Showtime, or whichever network he fights on, but he needs an opponent that is considered worthy enough to warrant interest from the boxing fans. In other words, Wilder needs someone that actually has a decent chance of winning the fight.

The only guy in the division right now that has a chance of beating Wilder is IBF/IBO/WBA/WBO heavyweight champion Wladimir Klitschko, who has held one heavyweight or another since 2006. But Wladimir won’t be fighting Wilder until 2016, possibly 2017.

Wilder could bring in decent ratings if he faces Alexander Povetkin this year. However, that fight isn’t expected to take place until 2016, because Wilder reportedly will be looking to get in another voluntary defense of his WBC title on September 26th. I think someone like Lucas Browne or Andy Ruiz Jr. would make for a good opponent for Wilder’s next fight.

I don’t like the names that were floated for Wilder’s next fight. They’re talking about Tony Thompson or Chris Arreola. Those guys are too old and battle worn in my view to be of much use for Wilder.

Wilder needs to pick out a better opponent for his next fight in order to bring the ratings back up to where they were for the Stiverne fight. Fighting guys like Molina is like asking for low ratings.

Not such a ‘wise guy’ move for Frank Buglioni »