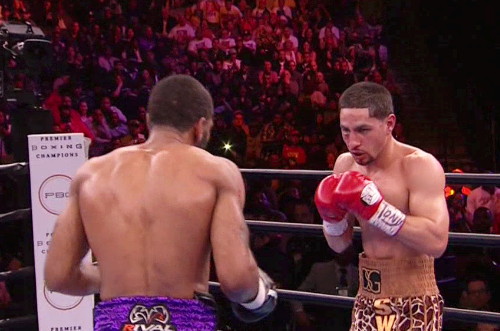 By Dan Ambrose: In a long overdue move, WBC light welterweight champion Danny Garcia (30-0, 17 KOs) will be giving up his WBC title, according to the World Boxing Council. The 27-year-old Garcia hasn’t defended his WBC 140 pound title since winning a controversial decision in Puerto Rico last year in March against Mauricio Herrera.

In Garcia’s last two fights since then, he’s beaten lightweight Rod Salka and Lamont Peterson at welterweight at catch-weights. With Garcia now reportedly signed to fight welterweight Paulie Malignaggi on August 1st in yet another welterweight contest, the WBC chose to have Garcia’s WBC light welterweight title removed and made vacant.

Garcia has now been appointed WBC Emeritus 140lb champion, which means that he can fight for the title at a later date if he show chooses. But as big as Garcia is now, I’m not sure if it’s something that will happen unless he struggles at welterweight when he eventually starts fighting the quality fighters in the division, whenever that will be. Garcia hasn’t shown any urgency thus far to start fighting the better fighters at 147 for some reason.

We may very well see Danny Garcia back at 140 in the future if he meets with failure once he fights the better welterweights in the division instead of guys like little Rod Salka and Malignaggi. Garcia needs to step up and face guys like Kell Brook and Keith Thurman sooner rather than later to find out what kind of future he’ll have at 147.

If Garcia can’t beat those guys, then he’ll need to be content with being just a contender at 147 rather than a champion. Garcia could then move back down to 140 and try and recapture his WBC light welterweight title if he can make the weight for the division still.

In an interesting move by the WBC, they’re going to have UCLA perform a body mass composition test to decide at which weight class Danny Garcia should be fighting at. Given that Garcia rehydrates into the 150s, I think it’s safe to say that he belongs at welterweight. Whether he can succeed in his natural weight class is another thing entirely.

Garcia is like a lot of fighters nowadays who boil down to fight in lower weight classes than their body is designed for. Once these fighters rehydrate, they have a huge advantage over their opponents in terms of weight. Saul “Canelo” Alvarez and Danny Garcia are just a couple of fighters that lose a lot of weight to make weight, and then put on a lot of water weight when they rehydrate. Garcia might find out that he’s nothing special in fighting guys his own size at welterweight.

Postol, 31, doesn’t have much experience against quality fighters in the light welterweight division, and it’s hard to predict how well he’ll do against a guy like Matthysse. Postol’s biggest win of his career was an 11th round knockout win over Selcuk Aydin last year in 2014. Since that fight, Postol has beaten little known Jake Giuriceo by an eight round decision.

« Danny Garcia gives up WBC 140lb title, Matthysse – Postol to fight for it