Pacquiao with little chance to avenge loss to Mayweather 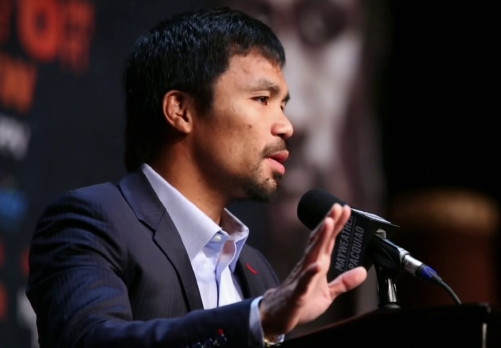 By Chris Williams: Unless Manny Pacquiao starts groveling for a rematch against Floyd Mayweather Jr. next year, I see very little chance of the Filipino star ever getting an opportunity to avenge his May 2nd loss to Mayweather. Pacquiao still has a small chance though of convincing Mayweather to fight him again, but I think it’s going to take some serious groveling for Manny to get to the fight.

For starters, Pacquiao may need to admit that the better man won the fight by saying that Mayweather was indeed the winner of the fight. Pacquiao can’t keep saying that he watched the fight on replay and saw himself winning 7 rounds to 5.

Okay, so Pacquiao needs to admit that he lost the fight, and he needs to stay it in a sincere way. Secondly, I think Pacquiao will need to try and get Mayweather on the phone so that he can personally ask him for a rematch. It’s probably not going to work if Pacquiao sends out the message through the media. He’s going to need to speak to Mayweather one-on-one like he did when he accidentally bumped into him during the Miami Heat game.

When speaking with Mayweather, Pacquiao will need to know his role, He can’t be coming from up high or speaking to Mayweather like they’re equals, because clearly they’re not. I don’t think Pacquiao should treat Mayweather like royalty, but he should definitely speak to him knowing that he’s peaking to a very important person. That means Pacquiao needs to smile a lot, sound pleasant and make sure he doesn’t stare Mayweather down. You don’t stare down the king.

Okay, so Pacquiao shouldn’t plead for a rematch, but rather casually mention it and talk about the big bank they can make if they fight a second time. Thirdly, I think Pacquiao will need to tell Mayweather that he’s willing to accept a purse split of 70-30 or 75-25 for the rematch. There’s nothing better than when your opponent mentions what they’re willing to take in terms of money.

If Pacquiao tells Mayweather what the split it right off the bat, it could get Mayweather thinking about the kind of cash he can make a second time around, and then he might see it as potentially worthwhile for him. There’s obviously going to be less money in the pot for the rematch due to the one-sided nature of their previous fight, but Pacquiao can make it worthwhile for Mayweather to take the fight if he tells him he’s willing to accept the small money at 75-25.

By doing that, Mayweather will still wind up making a fortune with tons of cash. If the first fight brings in $500 million, the rematch will be somewhere along the lines of $300 million. If Pacquiao accepts a smaller split of 25%, that leaves Mayweather with a bundle of money for the fight. Therefore, he’d be more interested in taking the fight with Pacquiao a second time.

« Lee Selby hoping to get early lead against Gradovich, and then sit on the lead