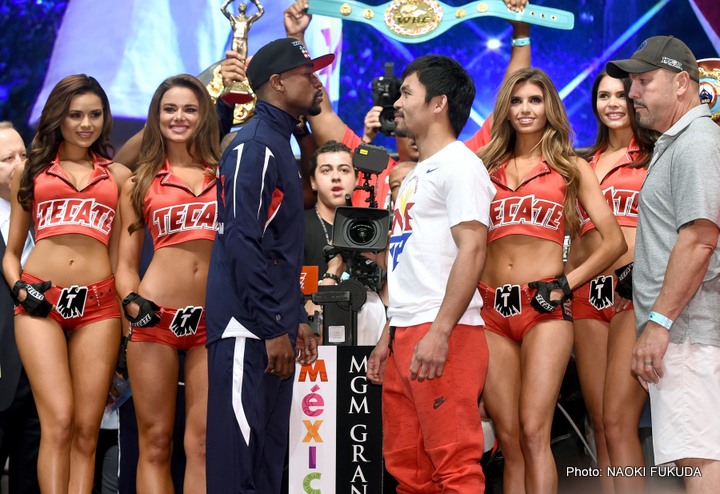 By Raj Parmar: Pound for pound king Floyd Mayweather Jr. has objected to the gloves Manny Pacquiao wants to use for their super fight tonight. Per espn.go.com, Mayweather’s camp approached the Las Vegas Nevada commission shortly after the weigh-in to protest that the Reyes brand gloves Pacquiao was set to use for the fight were not suitable.

Boxing gloves are normally made out of foam, horse hair or a combination of both. Punchers prefer gloves with horse hair as they offer maximum punching force. However, boxers who want to protect their hands lean towards the foam made gloves.

Floyd protested that Manny’s gloves contained horse-hair and thus should not be allowed for the fight. Team Mayweather recommended that per the contract CBS chief Les Moonves should be brought in as an arbitrator to settle the glove dispute.

Pacquiao’s representatives objected to Mayweather’s claims that the gloves should be denied as Manny’s gloves were approved by the commission days before the weigh-in, and further that Moonves does not have the power to come in and alter a commission ruling. The gloves were reviewed further and five hours after the weigh-in the commission came to a conclusion with both camps that Manny’s preapproved gloves would be allowed for use on fight night.

Almost exactly at this time last year, Mayweather’s scheduled fight with slugger Marcos Maidana was almost cancelled due to Floyd objecting to Maidana’s chosen gloves, which were made out of a combination of foam and horse hair. Maidana eventually changed his gloves to an all foam model and the fight went on.

It looks as if Team Pacquiao made a wise decision to have the commission inspect and approve Manny’s gloves well in advance, as any potential threat the gloves may have had to the fight going forward was able to be settled quicker than the Maidana instance due to the pre-approved check.