Mayweather: I’m going to make a statement against Pacquiao 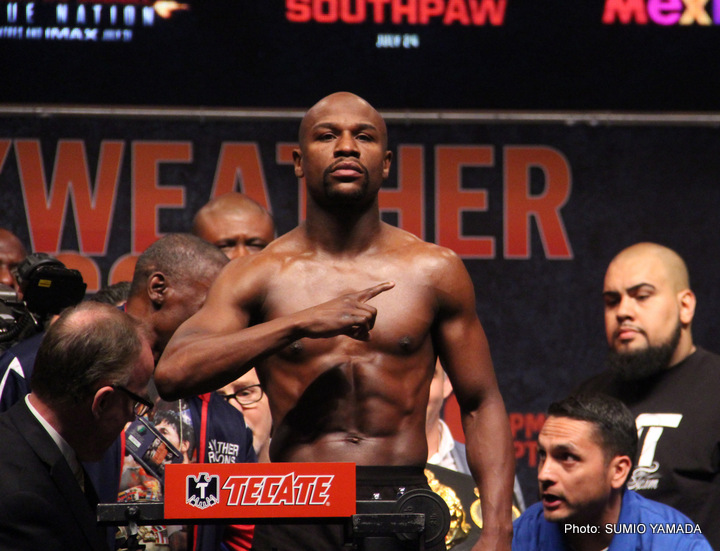 By Chris Williams: After weeks of listening to Manny Pacquiao and his trainer Freddie Roach trash talk him and brag about how they’re going to beat him on May 2nd, Floyd Mayweather Jr. (47-0, 26 KOs) is ready to go out and make a statement tonight on HBO/Showtime in his fight against the Philippine born Pacquiao at the MGM Grand in Las Vegas, Nevada.

Mayweather wants to whip Pacquiao and do it in style to where there is no doubt whatsoever in the minds of boxing fans who the better fighter is between the two.

“He knows he’s in with a real one. He knows it,” Mayweather said to ESPN. “I know I’m going to make a statement. Just pay and watch because I’m pretty sure he’s going to bring his best. You know I’m definitely going to bring my best.”

Mayweather isn’t buying the confidence that Pacquiao has been showing recently when the two of them have met with each other. Mayweather knows Pacquiao is plenty worried about this fight, and if he’s not worried then he’s going to be in for a real shocking time. Mayweather wants to unload on Pacquiao with his power shots and combinations and give him a real thrashing that he won’t soon forget.

The only negative that Mayweather has in his fight against Pacquiao is that some boxing fans will point to the age of the 36-year-old Filipino fighter and say that Mayweather waited him out until he was an old guy, even though Mayweather is older than Pacquiao at 38.

Still, some fans of the sport won’t give Mayweather his proper credit, saying that if he fought Pacquiao in 2010, he would have lost to him. There’s nothing Mayweather will be able to do with that argument because it’s too late to change the reality of the fight not taking place in 2010. Boxing fans will just have to live with Mayweather being the better fighter against this version of Pacquiao.

“One thing about Floyd Mayweather Jr., I always find a way to win,” Mayweather said.

There’s no question that Mayweather has always found a way to win no matter what kind of adversity that he’s experienced during his career. He found a way to win in his first fight against Marcos Maidana and in his grueling bouts against Jose Luis Castillo and Cotto.

Mayweather to press the attack early against Pacquiao »