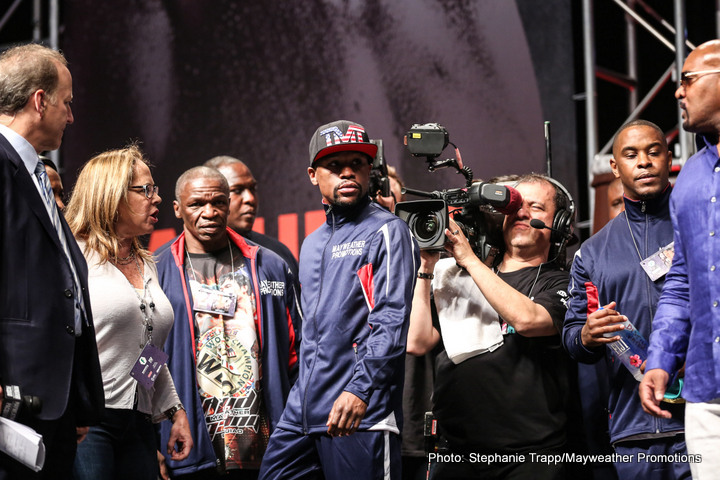 By Chris Williams: It’s looking like the Floyd Mayweather Jr. vs. Manny Pacquiao fight last Saturday will not only break the all-time pay-per-view number of 2.4 million but it will also likely shatter it by a considerable margin.

Kevin Iole of Yahoo Sports is estimating the Mayweather-Pacquiao fight will bring in from 5.6 million to 6.43 million pay-per-view buys. At the same time that number, plus additional revenue streams bringing money in for the fight, will shoot Mayweather’s paycheck to $250 million to $275 million. That’s quarter of a billion dollars for Mayweather. Pacquiao could make $170M to $190M.

That’s a big jump from the $100M to $120M that was originally estimated for Pacquiao. With a payday of $190 million, Pacquiao, his promoter Bob Arum and trainer Freddie Roach really don’t need to harp about a rematch.

There’s enough money for them to live well on with their cut of the revenue for this fight. After looking at how poor Pacquiao looked last Saturday, they must not think that he’d have any kind of a chance of beating Mayweather in a rematch. That’s not going to happen, and I don’t think many boxing fans believe it either.

The final PPV results still are being tabulated so they could come in less or perhaps more than Iole’s estimation, but you can count on the results to break the Mayweather vs. Oscar De La Hoya PPV record of 2.4 million set in 2007.

According to Yahoo, DirectTV brought in 1.15 million buys, Dish Network 500K, AT&T’s uVerse and Verizon’s Fios brought in 600K. The tally for them is 2.25 million, and this is before the cable PPV buys have even been counted. Most of the PPV buys will come from cable. This means that we’re likely to see more than double the amount that we saw with the satellite networks.

With that kind of huge cash for both fighters, you couldn’t blame them if they chose to face each other again just so that they can make that kind of money a second time. The chances of the rematch making similar money as the first Mayweather-Pacquiao fight are slim.

A lot of boxing fans were likely turned off by what they saw from the fight last Saturday and won’t want to lose big money a second fight for something that isn’t guaranteed to be anymore crowd-pleasing than the last fight. Pacquiao hurt things for the rematch by disclosing that he came into the fight with a shoulder problem. Even if Pacquiao and his team say that he doesn’t have any injuries the next time they fight, I think a lot of fans won’t believe him.