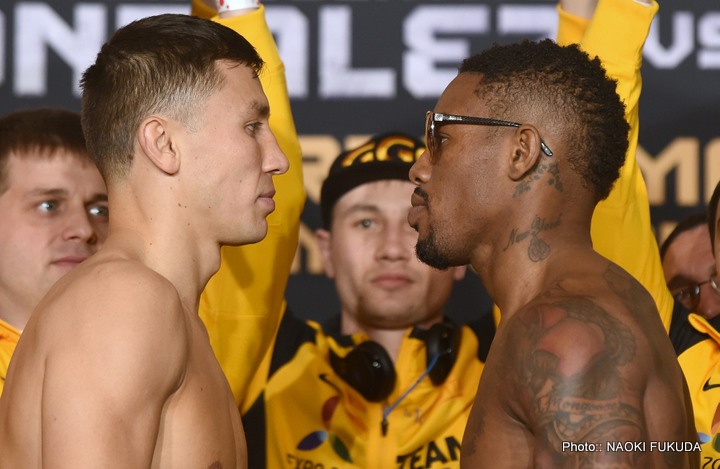 By Dan Ambrose: We recently saw the “Fight of the Century” between Floyd Mayweather Jr. and Manny Pacquiao with both fighters getting well over $100 million each. On the flipside, tonight we’ll be seeing two fighters getting much less than that in IBO/WBA middleweight champion Gennady Golovkin (32-0, 29 KOs) in his fight against challenger Willie Monroe Jr. (19-1, 6 KOs) at The Forum in Inglewood, California.

When you compare Golovkin’s $1.5M to the $3.5 million that non-world champion Saul “Canelo” Alvarez received for his mismatch against James Kirkland last week, it makes you wonder what’s up with boxing. Besides Canelo not being a world champion, he may not even be the best fighter in the 154 pound division. You can make an argument that the best fighters at 154 is Erislandy Lara, Demetrius Andrade and the Charlo brothers.

For Golovkin to start getting the big money that Canelo and Miguel Cotto are getting it’s going to require for him to get a big name to give him a fight so that the casual boxing fans can start recognizing him. Beating up on ESPN level fighters like Willie Monroe Jr. isn’t going to do much for Golovkin’s popularity.

Golovkin needs to get a scalp from one of the established guys in order to get to the next level and start making the big money. It would definitely help if Golovkin could get Canelo or Cotto in the ring, but I don’t think that’s going to happen anytime soon.

The only way I see Cotto fighting Golovkin is after his career starts sinking badly. Once Cotto gets beaten a number of times, I think he’ll finally agree to fight Golovkin, but by then it won’t help Golovkin’s career. Canelo’s promoter Oscar De La Hoya has already said that he doesn’t plan on matching Canelo against Golovkin for another two more years.

Golovkin’s paydays will likely rise slowly the more he fights. He’ll need to be content in facing the regular contenders and slowly become more popular rather than all at once like we saw with Floyd Mayweather Jr. and Manny Pacquiao after they both beat De La Hoya.

« Monroe: People will be surprised how I hit Golovkin