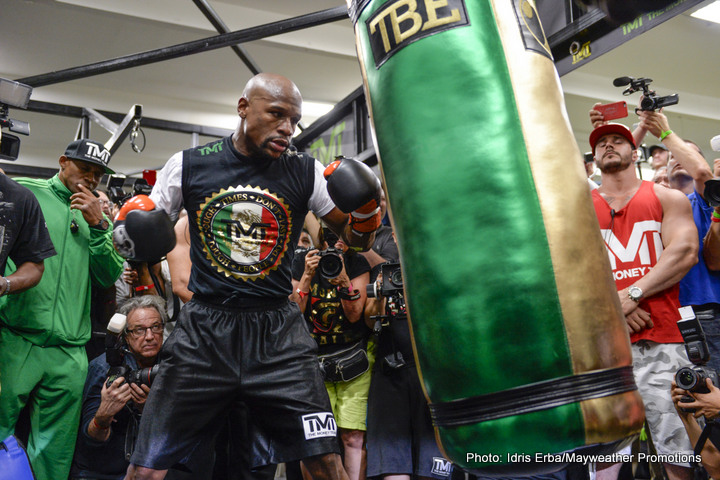 By Allan Fox: With his big fight against the Philippine’s Manny Pacquiao (57-5-2, 38 KOs) on May 2nd, unbeaten Floyd Mayweather Jr. (47-0, 26 KOs) will be looking to add his 48th consecutive win of his boxing career when they go at it from the MGM Grand in Las Vegas, Nevada.

If Mayweather wins this fight, he’ll be within one victory of tying the late great heavyweight world champion Rocky Marciano’s record of 49-0 that he set in September 1955. Former minumweight start Ricardo Lopez (51-0-1, 38 KOs) eclipsed Marciano’s record without a loss, but Lopez’s record wasn’t perfect like Marciano’s.

The one draw on Lopez’s resume that he received in 1998 against Rosendo Alvarez kept him from breaking Marciano’s perfect 49-0 record. If Mayweather Jr. can reach 50-0 without a draw on his record, he’d be breaking a record that has stood for the past 60 years. That’s a big deal. It would be like breaking Babe Ruth’s homerun record.

Pacquiao’s trainer Freddie Roach expects Mayweather to come up short in trying to break to the record. Roach feels that Pacquiao will defeat Mayweather on May 2nd to give him his first loss of his career, and thus ruin his chances of breaking Marciano’s record.

Even if Mayweather defeats Pacquiao in May, he’s likely going to need to beat Pacquiao again in September if the two mega-stars choose to face each other again. With the money that they’re making for their May 2nd fight, you’d have to believe that they’ll wind up facing each other a second time even if their first fight ends by a knockout or a one-sided decision. Neither fighter is going to want to receive a cut in pay by fighting someone else, and besides that, the loser will want to avenge his loss.

I think it’s safe to say that Mayweather will elect to retire once he breaks Marciano’s record because there really won’t be anyone out there for Mayweather to fight at that point. Once he’s fought Pacquiao twice, the only names Mayweather can fight will be Miguel Cotto and Saul “Canelo” Alvarez for a second time. Those are the only viable options for Mayweather if he wants to get a big payday. The other top welterweights, Keith Thurman, Kell Brook, Tim Bradley, and Amir Khan, lack the name recognition for Mayweather to get anything from fighting them.

The pay-per-view money would likely be similar to the money Mayweather made against Robert Guerrero and Marcos Maidana, but nowhere near the money he made for his fights against Pacquiao and Canelo. At the most, Mayweather might stick around long enough to fight Cotto and Canelo one more time. That would put Mayweather potentially at 51-0 if he beats them, as well as Pacquiao in a rematch in September of this year.

« Live On BoxNation On Saturday: Matthysse vs Provodnikov, Matthews vs Luis, Crawford vs Dulorme