. @FloydMayweather hit the gym for media day #1 yesterday. It's all about that hard work & dedication. #MayPac pic.twitter.com/I21a127oyP

By Chris Williams: Robert Garcia, the trainer for Marcos Maidana and a number of well-known fighters, was very impressed with video he saw of Floyd Mayweather Jr’s recent sparring for his fight against Manny Pacquiao. Garcia saw video of Mayweather manhandling one of his highly skilled sparring partners.

In Mayweather’s two fights against Maidana, he fought backing up a lot and using the shoulder roll defense. His power wasn’t impressive at that time. But in the sparring session, Mayweather showed a lot of power, and was backing up his opponent much of the time.

Mayweather’s new punching power is a product of the hard work he’s been doing with his strength and conditioning Coach Alex Ariza. He’s got Mayweather lifting weights, and he’s been working on a lot of different resistance exercises to increase his punching power. It’s obviously worked well, because Mayweather is reportedly punching with a lot more power than he has in the past. Just how much more power is unclear, if he’s punching with even 25% more power, he’s going to be a handful for the 36-year-old Pacquiao in their fight on May 2nd at the MGM Grand in Las Vegas, Nevada.

“He’s [Mayweather] looking very good, very strong and very fast actually,” Garcia said via esnewsreporting.com. “Very good and very strong, but let me tell you one thing; the guy he’s sparring isn’t Manny Pacquiao. If he does that with Manny Pacquiao, it’s going to be an exciting fight. In the fights, he’s [Mayweather] always backing up and very defensive. Right now he’s throwing a lot of punches, and actually doing a very good job of counter punching, but I don’t think he’ll do that in the fight because he hasn’t [in the past]. He’s never done that. He’s always throwing his right hand and counter punching. It’s good, good, and really good. I don’t know if he’ll do that with Pacquiao.” 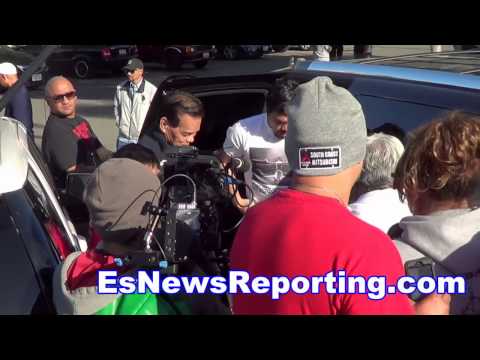 Mayweather is a devastating fighter when he starts walking down his opponents. If you saw what Mayweather did to Saul “Canelo” Alvarez, Roberto Guerrero and Victor Ortiz when he took the fight to them, you can’t help but be impressed. Those fighters were helpless against Mayweather when he was in the forward mode of his game looking to take their heads off with his shots.

Now when you add more power to Mayweather’s punches like now, he could be a real handful for Pacquiao when the two of them start trading shots. I don’t think Pacquiao’s trainer Freddie Roach has accounted for an aggressive Mayweather to be in the ring with Pacquiao on May 2nd.

Roach seems to be planning for a Mayweather to be fighting defensively with his back against the ropes like he did in his first fight against Maidana. If Mayweather fights going forward the entire fight, Roach and Pacquiao could be in shock, because they’re not planning that kind of Mayweather in this fight, and I suspect they won’t know what to do.

« Bermane Stiverne to fight in July

Ronda Rousey: Pacquiao will give Mayweather a hard time if he doesn’t jump in »