Pacquiao’s only chance of beating Mayweather is to fight him like Maidana did, says Robert Garcia 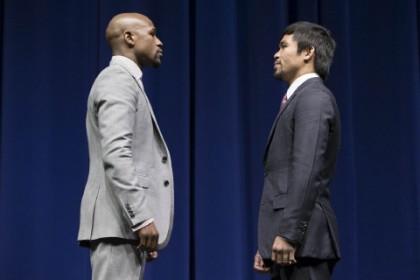 (Photo credit: Ester Lin/Showtime) By Chris Williams: Robert Garcia, the trainer for Marcos Maidana, thinks Manny Pacquiao’s only chance of defeating unbeaten WBA/WBC welterweight champion Floyd Mayweather Jr (47-0, 26 KOs) on May 2nd is for the Filipino fighter to jump on Mayweather and try to smother him his punches like Maidana did in his first fight against Mayweather in May of 2014.

Maidana used his huge 165 pound frame to push Mayweather up against the ropes, and keep him there while he rained shots at him from every angle.

Maidana still didn’t win the fight though, but he had some success initially before Mayweather made adjustments after the 4th round. Robert Garcia thinks Pacquiao will need to try and use the same strategy that Maidana used if he wants to beat Mayweather.

Whether the smallish Pacquiao can do that is extremely doubtful, because he’s not going to have the weight advantage that Maidana had, and he’s not going to be anywhere near 165 when he gets inside the ring with Mayweather on May 2nd at the MGM Grand in Las Vegas, Nevada. 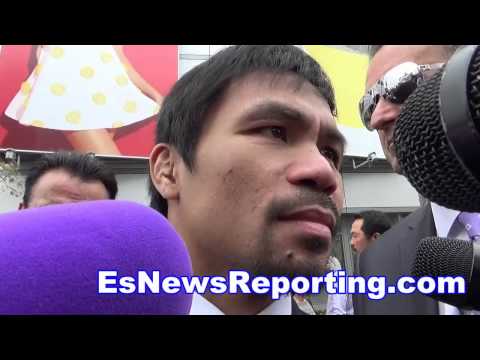 “I don’t think Pacquiao’s going to try and do what Maidana did; Pacquiao doesn’t do that,” Garcia said via Thaboxingvoice.com. “Pacquiao fights more in an out and counter-punches, and to do that you have to be really good to beat Mayweather. To beat Mayweather is the way Maidana did; just smother him and make it a dirty fight, make it an ugly fight, and I don’t think Pacquiao’s going to do that.”

Of course, Pacquiao won’t be smothering Mayweather or pushing him up against the ropes like Maidana did. Pacquiao doesn’t fight like that, and his trainer Freddie Roach seems to be convinced that Pacquiao can beat Mayweather by throwing a lot of shots, and attacking him from different angles. Roach – and Pacquiao – both think that Mayweather is going to standstill like he did in the first part of the Maidana and Miguel Cotto fights and just look to pick off shots with his shoulder roll defense.

They’re hoping that Mayweather will fight like that, because honestly that’s their chance of being competitive in this fight. Pacquiao has never shown the ability to compete with a fighter that used movement against him. Yeah, Pacquiao beat Tim Bradley and Chris Algieri, but neither of those guys used a lot of movement in their fights.

When Bradley beat Pacquiao in their first fight in 2012, Bradley used constant movement and had Pacquiao looking totally flustered. But in their rematch, Bradley stood perfectly still and let Pacquiao fight him in a trench warfare type of fight Just why Bradley elected to fight in that manner is anyone’s guess. I still don’t understand it. Why change your game plan when you already whipped Pacquiao the first time around?

“Mayweather’s just too smart and can adapt to anything,” Garcia said.

Pacquiao’s in and out style of fighting is old and tired, and it’s going to be too easy for Mayweather to figure out on May 2nd. If that’s all Pacquiao is going to do, then this is going to be one of Mayweather’s easier fights.

If Roach doesn’t have any real ideas in his head for Pacquiao to use, then I see Pacquiao getting really clowned by Mayweather. It’s going to be difficult for Roach because he’s going to need to be thinking hard in the corner to come up with something to turn things around for his Filipino star, but I don’t think Roach will have anything more to offer up other than ‘Go get him, throw more punches.’

« Mayweather vs. Pacquiao: Who will prevail?

Hearn: DeGale will win against Dirrell »