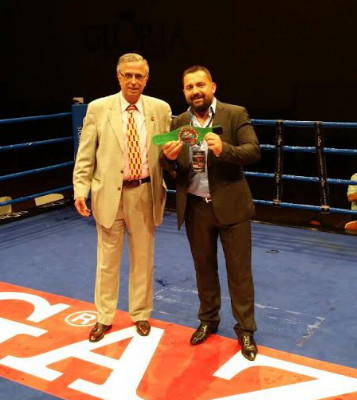 By Jim Dower: 43-year-old former two time world title challenger Tony Thompson (40-5, 27 KOs) stopped a badly out of shape 272 pound Odlanier Solis (20-3, 13 KOs) on Friday night in stopping him in the 9th round in front of a sparse crowd at the Gloria Sports Arena, Gloria Hotels and Resorts, Antalya, Turkey.

A balding and flabby looking 34-year-old Solis failed to come out for the 9th round. Solis didn’t look hurt in between the 8th and 9th rounds at the time of the stoppage. He just looked tired and grossly overweight.

Solis looked like he hadn’t trained at all for the fight, as he had rolls of fat on his midsection. The 272 matches the career-high he weighed for his fight against Konstantin Airich in May of 2012. That was when Solis came off of a 14 month layoff following a knee injury he suffered in getting blown out in one round by former WBC heavyweight champion Vitali Klitschko in March of 2011.

Thompson, who looked slow, was able to outwork Solis in every round by hitting him with left hands and right hooks and a lot of jabs. Every once in a while, Solis would load up on a shot and throw a leaping punch. But other than that, it was pretty much all one-way traffic coming from Thompson.

Solis and Thompson fought each other last year in March. Thompson defeated Solis by a 12 round split decision.

The win for Thompson keeps his career alive for now. As for Solis, it’s hard to see where he can go from here. Unless Solis can take off weight in a major way, he’s not going to go anywhere in the sport.

You have to ask why Solis didn’t train harder to get ready for this fight because he was so badly out of shape that he couldn’t mount much of an offense. In looking at all the fat that Solis was carrying on his frame, he looked like he was easily 40-50 pounds overweight for the fight.

If Solis could have trimmed down to around 220-230, he’d be a good fighter. But, of course, it might be impossible for Solis to take that kind of weight off at 34. He would need a really great trainer, and he might need someone to be with him to monitor his daily intake of food. If he were to gorge on food after training every day, he’d be defeating the purpose of all the training he’s doing.