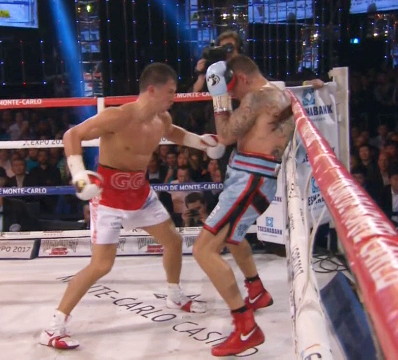 The fight was supposed to have been a competitive one, but it turned out to be a one-sided fight with Golovkin battering Murray each time he could catch up to him to land his shots.

Murray tried his best tonight and was able to land some really nice shots. You could tell by the swelling on Golovkin’s fight that Murray was a lot tougher than he expected him to be. If Murray had a little more power, he would have had Golovkin on his heels in this fight, but the power was lacking with the British fighter.

Murray never seemed to recover from two knockdowns he suffered in the 4th round. Golovkin knocked Murray down with body shots. After the 4th, Murray seemed more intent in surviving than in winning the fight.

After the fight, Golovkin said he wants to unify the middleweight titles against the other 160 pound champions. Golovkin specifically mentioned wanting to fight WBC middleweight champion Miguel Cotto next if he’s willing to take the fight.

Golovkin is Cotto’s mandatory challenger, and the World Boxing Council has already said that Cotto has to face Golovkin later this year if he wants to keep his WBC title. Golovkin will be taking a normal title defense on May 16th, and that would be the perfect time for Cotto to take the fight.

“This was my strategy in the first six rounds. This is my drama to break him down,” Golovkin said. “I know my plan. It didn’t matter what he was doing. I hope Miguel Cotto [will fight me], because he’s the WBC champion. I need unification fight.”

Dragging Cotto into the ring might prove to be an impossible task. Cotto will surely vacate his WBC title after he faces his next opponent, which is rumored to be Tim Bradley or Brandon Rios. Those two are welterweights, and they would mean that Cotto would have a size advantage over them. Golovkin may not ever get Cotto to agree to fight him, but it’s possible that Saul “Canelo” Alvarez will eventually face at some point, possibly in 2016.

That’s what Golovkin’s trainer Abel Sanchez thinks. He sees Canelo not facing Golovkin until next year. However, for that fight to happen, Canelo will likely need to push for the fight with Golden Boy to let him take the Golovkin bout, because it’s likely that they’ll steer Canelo away from Golovkin until he starts showing his age at some point in the future.

Right now, Golovkin is fighting at too high of a level for Golden Boy to put their flagship fighter Canelo in the ring with him. The chances of Canelo taking a beating and getting stopped would be way too high. This wouldn’t just be a situation where Canelo would get clowned like he was against Floyd Mayweather Jr. This would be a fight where Canelo would very likely get knocked out, and possibly even hurt.

« Saul “Canelo” Alvarez vs. James Kirkland moved to May 9th in Houston, Texas

Paul Smith: Abraham is only behind Froch in the super middleweight division »