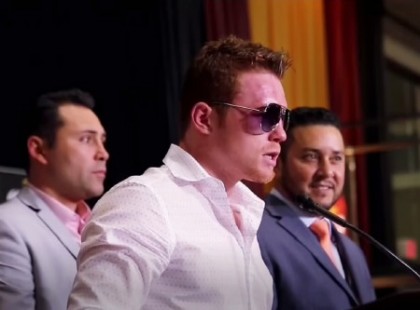 By Jermill Pennington: In a very candid interview with Tha Boxing Voice Demetrius “Boo Boo” Andrade (21-0-14ko’s) took the opportunity while cameras were rolling to rip in to Canelo Alvarez in epic fashion. Andrade the current WBO super welterweight champion wanted to know why Canelo choose to fight James Kirkland instead of him this coming May. Andrade went on to point out how Kirkland has been out of action since December of 2013 and has no belt to offer.

Andrade who is available for the May date and is a guy in the division that has a belt and had this to say “I usually don’t say this about fighters but Canelo you’s a b!+@$”. Andrade went on to call Canelo out of his name several times as well as the Charlo brothers calling them bums “jamell, jamal, whichever one of them bums”.

Andrade made sure to call out Canelo on his assertions of wanting to fight the best. “if you guys are the so called best then fight Demetrius Andrade”. Andrade made it clear that he holds the belt that Canelo should be after rather than facing a James Kirkland. Andrade said that unlike Lara he would be willing to sit there and fight and not look to break track records vs Canelo. It’s clear that Andrade has a point as he himself pointed out by saying Canelo could be a Mexican star with a belt but choose to fight James Kirkland with nothing on the line.

Andrade raises good points in this video. He described how the powers that be keep the “prized” fighters away from lesser known dangerous opponents. Andrade not backed by any major promotional companies may find it hard to get fights against the well-known fighters being that he’s high risk and low reward. A 6’1 southpaw with a good amateur backing is always a fighter that others fighters steer clear of. Andrade seems to know what he can do in the meantime until the fights come his way “stay in the gym and keep winning”. The fights will eventually come, continuing to win until that time is the obstacle. Here’s the link http://youtu.be/kCVLPzLB5yc

« A great weekend for the journeyman fighters

Will monopolization of the boxing Big Names hurt Fight Fans? »