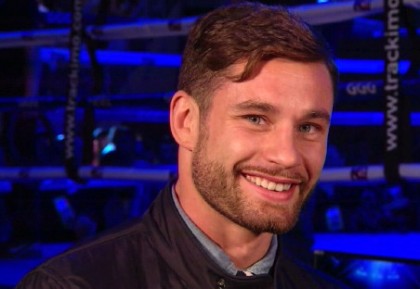 By Dan Ambrose: #1 WBO light welterweight contender Chris Algieri (20-1, 8 KOs) could be facing Terence Crawford (25-0, 17 KOs) for the vacant WBO 140lb title on April 18th in a fight that is possible for Crawford’s hometown of Omaha, Nebraska.

Crawford, 27, is moving up in weight from the lightweight division where he currently holds the WBO lightweight title. He wants to campaign now as a light welterweight, and his promoter Bob Arum is looking to get him an immediate title shot.

The negative thing about the potential Crawford-Algieri fight is that has the makings of a real stinker because both fighters are pure boxers, and it could be a dull counter-punching affair.

A fight that promises to be an arguably more exciting affair is between #2 WBO Lucas Matthysse and #3 WBO Ruslan Provodnikov. That would be the better fight in my view to have the vacant WBO light welterweight title on the line.

“We’re talking about it [Crawford-Algieri], and that’s all I can say,” said Crawford’s promoter Bob Arum to RingTV.com. “Joe [DeGuardia of Star Boxing] will be getting back to me on Friday, so we’ll see.”

Algieri ended up getting easily beaten by Pacquiao in losing a one-sided 12 round unanimous decision. However, the World Boxing Organization chose rank Algieri at #1 in their WBO rankings at 140 rather than drop him down completely from their top 15 rankings. So instead of boxing fans seeing a Matthysse-Provodnikov fight for the vacant WBO light welterweight title, they could see two boxers mixing it up with Crawford and Algieri fighting for the vacant WBO 140lb title.

It just a dull fight because of Crawford rarely staying in the pocket and because of all the tying up he did to keep Beltran from getting his shots off. Before that, Crawford stopped super featherweight Yuriorkis Gamboa in a 9th round TKO in June of 2014. Gamboa did a good job of forcing Crawford to exchange instead of holding and moving, and the fight was actually entertaining due to Gamboa’s efforts.

The WBO is allowing Crawford to get an immediate title shot at a new weight at 140 rather than having him fight his way to a title shot. That’s one of the WBO’s rules that they have. They allow champions in other weight classes to move up in weight and get immediate title shots without them having to prove themselves in the new weight class first. That’s obviously a controversial thing because Crawford will essentially be leap frogging over more proven fighters at 140 like Matthysse and Provodnikov in order to face a guy that was just beaten in his last fight in Algieri.

“Crawford has the right to move up and fight the No.1 guy for the vacant title,” said WBO president Paco Valcarcel via RingTV.com.

I don’t like that rule and I think it’s bad for boxing to have champions in other weight classes move up and immediately get title shots.