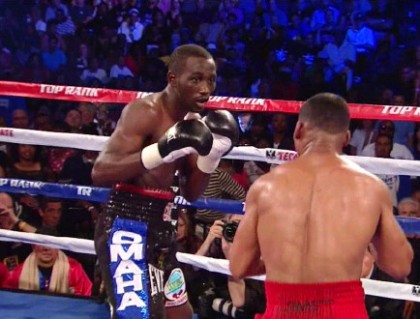 By Scott Gilfoid: WBO lightweight champion Terence Crawford (25-0, 17 KOs) will be moving up to the 140 pound division for his next fight on 4/18 in Omaha, Nebraska.

The possible opponent for his first fight in this weight class as Thomas Dulorme, according to Fightnews. Crawford’s co-manager Brian McIntyre is interested in matching him against Lucas Matthysse, Chris Algieri and Mauricio Herrera, although it’s highly unlikely we’ll see Crawford face any of those guys in his first fight in the light welterweight division.

Matthysse would be especially dangerous due to his power and the kind of pressure that he puts on his opponents. Crawford was buzzed at one point by Yuriorkis Gamboa in their fight last year in June of 2014, and if Gamboa was able to hurt Crawford, then Matthysse would have an excellent chance doing far worse.

Top Rank is going to need to be careful with Crawford for a while before they put him in with guys that are dangerous. I mean, Dulorme has good punching power, but he’s not the puncher that Matthysse is.

Top Rank is grooming Crawford to try and turn him into a big star, and likely matching him against Manny Pacquiao in the near future. They can’t wait too long because Pacquiao is already getting up there in age at 36.

It wouldn’t be fair to Pacquiao to have him fight Crawford in four years when Pacquiao if 40 and Crawford only 31. Before then, there’s some potentially good fighters that Crawford can be matched against like Chris Algieri, Ruslan Provodnikov, Adrien Broner, Danny Garcia, Viktor Postol, Matthyse, Lamont Peterson and Mikey Garcia. Getting the Al Haymon fighters like Broner, Garcia, Matthysse and Peterson to fight Crawford may prove to be impossible due to Haymon not having a working relationship with Crawford’s promoter Bob Arum. But, fights against Algieri, Pacquiao, Garcia, Provodnikov and Postol are definite possibilities.

Crawford is coming off of a 12 round decision win over Raymundo Beltran in his last fight in November of 2014. It was a fight that showed the good and the bad of Crawford. While he did a good job of using his boxing skills to dominate Beltran and shut down his offense, Crawford’s fighting style was boring in the eyes of a lot of fans.

Crawford’s fans in Omaha, which is where the Crawford-Beltran fight took place, loved the way he fought. However, general fans just wanting to see a good fight didn’t like all the holding and moving that Crawford did, and they complained that it was boring to watch him.

Crawford is going to need to be a little more offensively inclined if he wants to win fans outside of the Omaha area, because the constant holding and moving that Crawford does is less than thrilling for some fans to watch.

« Khan: I have to be next for Mayweather if he doesn’t face Pacquiao

Sulaiman: The WBC has removed obstacles to make sure Mayweather-Pacquiao fight happens »