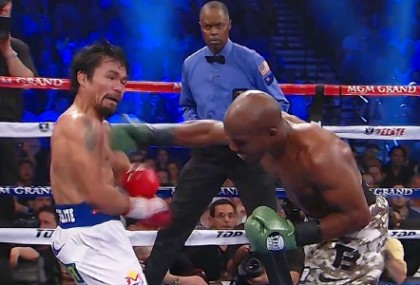 By Chris Williams: Manny Pacquiao says he’s still got a deadline until the end of January for Floyd Mayweather Jr to agree to his side of the contract and sign off on it otherwise Pacquiao will be moving on.

The negotiations have become slowed due to Showtime and HBO still hashing it out, so Mayweather isn’t going to sign off on something that still hasn’t been worked out by the networks.

If Mayweather were to sign the contract now and the fight ended up only being televised by HBO, he’d be shooting himself in the foot because he fights on Showtime.

It’s unclear why Pacquiao is all of a sudden giving a hard deadline for a contract that isn’t ready to be signed. It just shows you that Pacquiao should stay in the background and let the professionals work out the deal rather than letting a fighter sabotage his own fight.

“The deadline is until the end of the month,” Pacquiao said to the latimes.com on Wednesday. “I just want to make the people happy with this fight for the fans.”

If Pacquiao walks away from the Mayweather fight, it would be the second time in Pacquiao’s career that he’s flushed millions down the toilet with his questionable decision making. Pacquiao had a chance to fight Mayweather in 2009 in a fight that would have given Pacquiao a 50-50 purse split of the cash for the fight.

All total, Pacquiao could have possibly made as much as $100 million for the fight if he had stuck it out and agreed to the random blood testing that Mayweathe wanted. Instead of staying with the negotiations, we saw Pacquiao and his promoter Bob Arum set a short 24 hour deadline for Mayweather to accept Pacquiao’s wishes on the drug testing otherwise the negotiations would end. The deadline passed without Mayweather giving in and the fight failed to take place.

”Not long after declaring that the fight was off, Arum…offered Mayweather a 24-hour take-it-or-leave-it deadline to accept Team Pacquiao’s terms for drug testing,” according to Wikipedia [http://en.wikipedia.org/wiki/Floyd_Mayweather,_Jr.]

As you can see the use of deadlines in negotiations with Mayweather aren’t a new thing for Pacquiao and his promoters, and it failed in the past? You would think that they would have learned their lesson from the previous negotiations to stick it out to try and iron out a deal rather than failing to agree to what Mayweather wanted and then coming up with a hard deadline.
The move by Pacquiao to pull out of the negotiations and then fight one of Arum’s Top Rank stable fighters Joshua Clottey cost Pacquiao many millions of dollars that he’ll never see again. He’ll never get another chance of getting a 50-50 deal with Mayweather because his career situation is not what it once was. The pay-per-view numbers are down for Pacquiao and he’s been beaten twice as well.

“We appeased Mayweather by agreeing to a urine analysis at any time, and blood testing before the press conference and after the fight. Mayweather pressed for blood testing even up to the weigh-in. He knew that Manny gets freaked out when his blood gets taken and feels that it weakens him. This is just harassment,” Arum said via the Grand Rapids Press at http://www.mlive.com/mayweather/index.ssf/2009/12/promoter_bob_arum_mayweather-p.html.

As you can see coming events cast their shadows before and now we’re seeing Pacquiao giving a deadline to Mayweather that will likely keep the fight from taking place. So instead of Pacquiao getting a huge payday against Mayweather, he’ll likely need to settle for facing Jessie Vargas, one of Arum’s Top Rank stable fighters, and possibly get $20 million rather than a payday of $60 million to $80 million.

Tyson Fury to Deontay Wilder: “I’ll rip your heart out and feed it to you, chump!” »