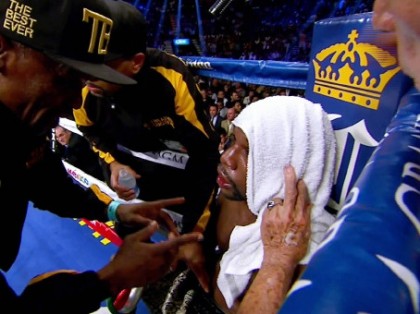 By Chris Williams: WBA/WBC welterweight champion Floyd Mayweather Jr met with WBO title holder Manny Pacquiao last Tuesday night in a Miami, Florida, presumably to discuss the negotiations for their May 2nd mega-fight at the MGM Grand in Las Vegas, Nevada, according to a source from the Nydailynews.com.

Mayweather and Pacquiao had met earlier in the night at the Miami Heat vs. Milwaukee Bucks game at the American Airlines Arena. The two fighters met on the court at halftime after Pacquiao’s adviser Michael Koncz decided to walk up to Mayweather to ask him if he’d like to talk to Pacquiao.

The meeting between the two super stars ended with Mayweather giving Pacquiao his cell phone number.

A source from Fighthype said that Mayweather told Pacquiao that he should stop lying about the contract. However, Koncz denies that this happened, saying “It was a friendly discussion,” according to the New York Daily News.

Whether Koncz was on the level about the conversation is unclear. He is Pacquiao’s adviser and it’s debatable whether he would admit if Mayweather gave Pacquiao a dressing down in public.

“I went over to Floyd to break the ice and asked him if he wanted to come over and talk to Manny,” Koncz told the New York News. “I’ve known Floyd for a while and met him many times before from previous negotiations for the fight. They had a private conversation. Floyd told us he wants to make the fight happen.”

Koncz didn’t say where the two sides are in the negotiations and he didn’t expound on how the conversation went last night when the two were in the hotel. You would think that Mayweather and Paccquiao conversed on the exact sticking points in the negotiations in order to try and make some headway. They are after all nearing the January 31st deadline that the Filipino star set earlier this month.

Unless Pacquiao extends the deadline by adding a few additional weeks to a month, we could see Pacquiao walk away if the fight isn’t signed by 1/31, and then fight whoever his promoter Bob Arum digs up for him to fight. The guy that Arum has mentioned recently as Pacquiao’s backup option is Britain’s Amir Khan, but some boxing fans think that Arum is pulling a trick by mentioning Khan for Pacquiao.

Instead, they see Arum doing the old bait and switch by saying they couldn’t make the Khan fight, and that they’ll need to match Pacquiao against his Top Rank stable fighter Jessie Vargas. That’s not a fight that fans are clamoring to see at this time.

To be sure, there are some fans that want to see Pacquiao fight Vargas, but those fans are in the minority. Khan is the ideal backup for Pacquiao, but he’s also a very difficult opponent to fight now that he’s being trained by Virgil Hunter.

Arum is a wise old fox, and he’s got to know that Khan could mess up the gravy train by beating Pacquiao and driving his pay-per-view numbers into the ground. That’s why I’m extremely skeptical about Khan getting the fight against Pacquiao if the Mayweather mega-fight fails to happen.

Khan: I have to be next for Mayweather if he doesn’t face Pacquiao »