Mayweather and Pacquiao building the hype 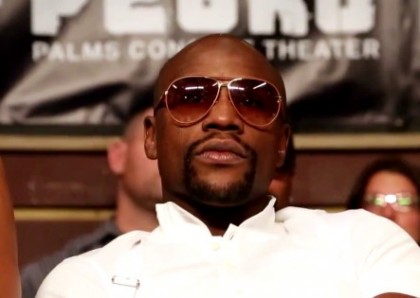 By Rick Jones III: The best thing any business can do to make there product shine is to market and manage. I believe Showtime has talked and explained to both fighters the in and outs of what is going to happen in the next few months. The first thing that happen was a friendly confrontation in public. The fighters were well train to show that they just met and talked for a brief moment. I paid more attention to detail on body language and facial gestures. I believe that Manny Pacquiao didn’t expect Floyd Mayweather Jr to go through with the meet and greet.

Mayweather never seem to talk directly to Manny Pacquiao to give that sense of hate. The last thing that caught my attention was the forced hug at the end, Looked like it was planned and neither fighter wanted to go through with it.

I would bet good money that the next thing that will be done is the announcement of the biggest fight in boxing history . The Super Bowl would be great marketing for a fight of this magnitude but is Showtime really going waste another million on just a one minute spot on the Super Bowl? I don’t think so.

I believe there going to have a big press conference in Las Vegas invite every boxing analyst and let them have at it with all the questions about this fight not being made and how it got made. The thing that will get revealed and the next big topic would be the terms of the contract who got what, drug style testing, gloves, and size of ring. The next thing on the agenda will be “All Access”. Showtime knows this will probably be the best all access of all time giving both sides of the story and training methods.

I’m going to assume that Showtime is working overtime on every angle to get this right. I love how Espinoza is covering every media article and throwing people under the bus on how this fight is not even in negotiations. Espinoza shows me a man that is not sure on how to handle this type of fight and publicity. I have been seeing some weird stuff from this guy every time an article comes out that is really close to the truth, Espinoza has to come out and say that nothing is going on and re-tweet it on twitter. Only Showtime knows why there putting there faith in this guy at that moment, well I guess this explains why HBO let him go with out evening blinking.