Sergey Kovalev: The new era of the light heavyweight division 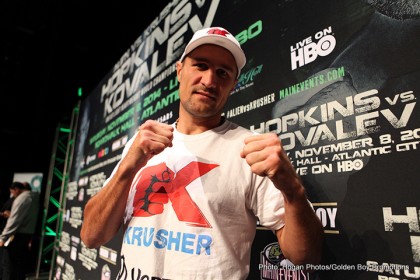 By Wilmar Patino (Boxings Finest): First off I want to Congratulate Sergey Kovalev for a brilliant fight vs the ageless wonder Bernard Hopkins. As someone who has been following Sergey Kovalev since his days on NBC Sports back when he dismantled and KO’d Gabriel Campillo ( A former light heavyweight champion). I would like to give him credit for taking this fight and proving to the naysayers that he is more than just a puncher. I would also like to thank Hopkins for taking this fight and for giving us an exciting 12th round by giving his best in the closing round of a much anticipated fight.

With that being said I have read a lot of articles on here and seen a lot of love and respect being given to Hopkins for his career milestones and bravery coming into the fight. As well as some much deserved respect for his attempt at unifying the titles last night. Yet this article will be about a favorite fighter of mine Sergey “Krusher” Kovalev.

I feel inclined to write this article because I’ve been following him for a few years. I am currently working with him on some small projects and hope to continue being a part of his circle however small my part may be. In working with him I have researched a lot about him and his promotional team. What I can tell you is this, he is indeed a special fighter slowly climbing up the HBO ratings ladder and into our hearts and possibly boxing history. He’s surrounded by a good team with Kathy Duva the C.E.O. of Main Events as his promoter and John David Jackson his coach. As well as Egis Klimas his manager who all seem to truly want the best for him and also see the potential in a superstar with Sergey Kovalev.

Sergey Kovalev had a lengthy amateur record of 195 wins 18 losses. Since then he has been fighting anyone, anywhere and everywhere. He had a split decision win vs Darnell Boone who seemed to trouble him early in his career. Despite Darnell Boones unimpressive record you all should know about how Boone has been able to trouble just about everyone he’s faced and his opposition has been impressive none the less. A resume that consists of being the only man to knock down Andre Ward, Knock Out Adonis Stevenson, while fighting the likes of Gabriel Rosado, Brian Vera, Erislandy Lara among others. You might remember I wrote an article not too long ago shedding light on the story of Darnell Boone. At the time Sergey couldn’t find a promoter so later on Kathy Duva took a chance on Kovalev. In order to sign to Main Events he had to get through Darnell Boone and win the rematch. Kovalev ended up Knocking Darnell Boone out in the 2nd round and became a member of the Main Events boxing roster.

From there he began a terrorizing reign knocking one opponent out after another. Fighting anyone who would be willing to step into the ring with him. Some were former champs, former top prospects, undefeated fighters, and others we never heard of. This (Bernard Hopkins) was a big step up for Sergey and he performed exceptionally well. He stuck to the game plan and conserved his energy to attempt knocking out Bernard Hopkins in the 12th and final round, knowing that if he gassed out in the process of looking for the knockout the fight was in the bag and over with. I said to myself if Sergey knocks him out that would be amazing, but if he could outbox him and dominate every round it would be far more impressive to me. Especially when you factor in that Kovalev has never gone the full 12 rounds. I believe he did just that and he might really be a special fighter.

Of course I don’t want to overly praise him, he still has a ways to go for us to categorize him as a great but for now he is taking steps towards the right direction. Sure he’s not a perfect technically sound fighter but he does have the equalizer in both hands more specifically his right. He also is good with his straight punches and has patience and composure in the ring. These are all good qualities of a fighter who can potentially become great. He showed us some shades of his Boxing IQ last night. I believe the ceiling is high with him and we can all look forward to a man who’s not afraid of fighting anyone and willing to entertain us with his skill and power. You may not have bought into him by now, but as someone who has been watching his moves for many years I feel his best is yet to come. He’s getting better every fight and John David Jackson seems to know how to come up with a good game plan for him and Kovalev knows how to execute it.

I believe with the love and support from his team and his long hard fought road to stardom that Sergey understands very clear who he is and what he is capable of. He understands the fundamentals and the road that lies ahead for true greatness. I pride myself in never being a biased writer but to tell you that i’m not being bias a bit right now would be a lie. Maybe its because of my personal investment in Kovalev as a boxer and friend I may come off as being bias and that’s ok. I like to think that I just knew about his potential all along and felt he had a bright future coming. So I did what I could to be a part of some boxing history if there’s history to be made. We still have some questions to be answered by Sergey Kovalev, but last night was the first of many where he gave us a satisfying reply.

I don’t know what you think of Sergey Kovalev right now, and maybe you’re more concerned with the legacy of Bernard Hopkins and what this fight meant to him and his career. As for me I’m more concerned about Sergey Kovalev and his future in Boxing. This was the first major event that gave us some hope in ending the cold war and if it does end I’d like to think Kovalev and his team had a little something to do with it too although Hopkins was the main reason it happened. We will have to wait and see what the future holds for Sergey Kovalev and the Light heavyweight division. If ever the fans needed someone to vouch for the new unified champion let me say that I do and I believe Sergey Kovalev will be the future of the Light Heavyweight division at a time where the division seems to be heating up. Sergey Kovalev is the unified champion who can reign for a long long time. Sky is the limit!

Next chapter for Gamboa Starts Nov. 15 in Mexico »