Khan must impress against Alexander to have chance for Mayweather fight 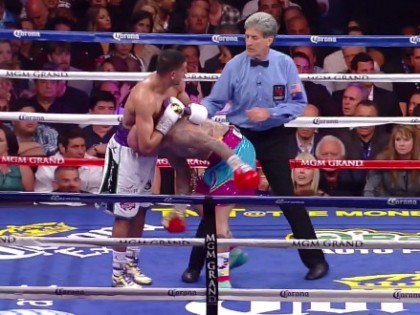 This is likely Khan’s last chance to earn a fight against WBA/WBC 147 pound champion Floyd Mayweather Jr. If Khan fails to beat Alexander of if he fails to impress in this fight, then it’s pretty much over for Khan in terms of him getting a fight against Mayweather.

There’s little chance that Mayweather is going to want to fight Khan next May if Khan loses to Alexander, or if Khan struggles against him. But even if Khan wins, he still could lose out on a Mayweather fight if he fails to fight a clean fight.

Khan can’t afford to run, shove, pull down on Alexander’s head or put him in head-locks all night long if he wants to get a fight against Mayweather. Watching Khan’s last fight against Luis Collazo was like watching an MMA fight with all the head-locks Khan put on Collazo.

It wasn’t just the head-locks though that made the fight look like an MMA bout. Over and over again, Khan grabbed Collazo and bent his head forward by leaning on the back of his neck with both hands. The referee working the fight Vic Drakulich docked a point from Khan in the 8th, but that didn’t stop him from fighting that way.

“I plan on winning impressively to show that I am truly one of the best welterweights in the world,” Khan said.

Golden Boy Promotions might have been better off sticking the Khan-Alexander fight on the undercard, because some of the other fights on the card promise to be far more entertaining than watching Khan and Alexander fight. Khan can be an entertaining fighter when he’s not holding and wrestling his opponents, but it’s been ages since Khan fought without holding constantly.

Personally, I’d prefer to see the Keith Thurman vs. Leonard Bundu or the Demetrius Andrade vs. Jermell Charlo fight in the main event as the headliner fight on the December 13th card rather than Khan-Alexander. To me, I see Khan vs. Alexander as the third fight before the main event rather than it being worth of main event status. I mean, Alexander is coming off of a one-sided loss to Shawn Porter in his last fight, and that kind of kills the interest for me in seeing him in the main event.

Besides that, Khan hasn’t fought a quality opponent since his loss to Danny Garcia in 2012. To be sure, Khan has fought three times since then, but against weak opposition in Collazo, little 5’5” Carlos Molina, and past his prime Julio Diaz.

I think Khan should be on the undercards until he starts beating top tier opposition again instead of guys coming off of losses or fighters that aren’t ranked in the top 15. Collazo was ranked in the top 10, but he did nothing to get ranked there other than beat Victor Ortiz, which isn’t a big deal.